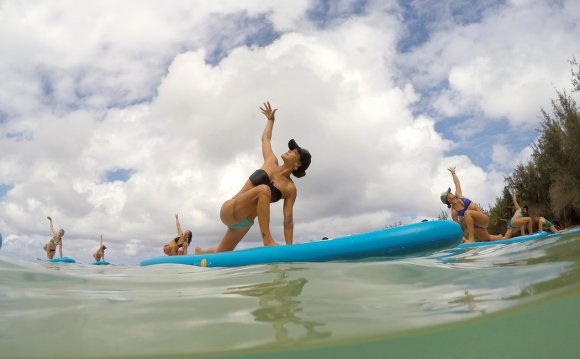 I attended the Wanderlust festival last week in Snowmass, Colorado, a village right next to the tony resort town of Aspen in Colorado. It was billed as a life-changing experience, and since my dear friend only recently moved to the Aspen area, I was doubly interested in a half a week of yoga, Buddhist talks, nature, and catching up with my sorority sister. There are Wanderlusts closer to NYC in Vermont and West Virginia, but I don’t have friends there, so I booked my plane ticket out to Denver and rented a Prius for the three hour drive through the mountains. (I could have flown straight to Aspen … if I had an extra , 000 to spare.)

The drive to Aspen was absurdly beautiful. The wide sky over Denver had light pouring through the clouds, creating gold chandeliers across the valley. As I drove through the mountains, the sun set right in front of me. Then, the full moon rose to my left and I almost crashed the car flipping out. I immediately began fantasizing about moving to Colorado.

My first class the next morning was at 8 am with Aaron King, a local who runs the studio King Yoga Aspen. It was held under an outdoor tent, with the dew still fresh on the grass. At this early in the morning, the vendor tents were still closed, and the Snowmass Village was quiet. I was happy that I got up early, because it was a great way to start the day. If Car Talk was run by yogis, they would sound like Aaron – he had a relaxed, straightforward style, and played jam band music for the whole class.

The tent had a view of a small mountain face (which I would hike up later), with a meadow of yellow flowers and clouds scudding past in the sky. I left feeling refreshed and ready for the day.

Elena Brower, of course, filled her class in the huge hotel conference room. It was a great class, challenging and novel, and the music by DJ Drez was a great accompaniment. Brower had us stretch fully out on our mats when we were on our backs at the beginning and end of class, and encouraged us to keep contact with the people we would inevitably touch with our hands. I felt bad for the girl who stretched back and grabbed my dusty, sweaty feet, but when I apologized during a later hugging session, she just laughed, and did it again and the end, playfully caressing my foot. Burning Man it was not, but traces of that ethos were there.

Eoin Finn’s yoga class, also in the conference room, was fun – he likes to make funny quips. But some poses were too complicated for those of us in the back to see, even though he really did try to demonstrate them. He spoke at length about taking better care of this earth at the end, as we gathered close around him at his invitation. I wondered how many people at the festival would take that to heart, if they made the connection between how their yoga clothes are made and “the earth.”