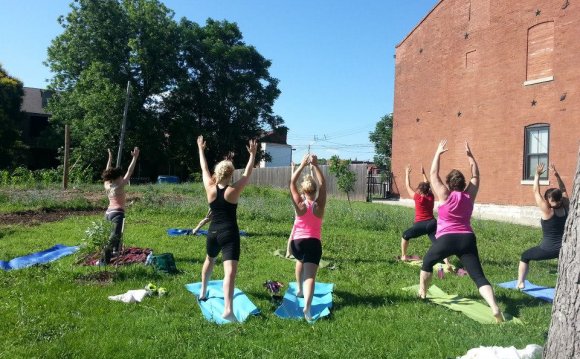 Falling in love with yoga at the age of 50 has been an exciting adventure for Sandra. She views herself as a role model for others who wish to begin a serious yoga practice, feeling that if she could begin yoga at age 50, others can also. Her approach to practicing includes that yoga is not about being “uber” flexible, it’s about breath and the willingness to try something new. There is no perfect yoga, only yoga practice. Sandra seeks to help students touch their own sacred sense of wholeness and to access a quiet calmness within. Sandra received her 200-hour teacher certification in St. Louis, Missouri in 2009. She has attended workshops by David Swenson and Rolf Sovik. She has also completed Amy Weintraub’s “Yoga for Depression” at the Kripaula Center, and recently completed David Emerson’s 40 hour “Trauma-Sensitive Yoga Training”.

Marie turned to yoga about 13 years ago when her husband was diagnosed with early onset Parkinson’s and she has seen firsthand its therapeutic potential. Receiving her 200-hour teaching certification in 2010, Marie began teaching yoga at Lakeshore Foundation, serving seniors and those with chronic or disabling health conditions. Marie is keenly interested in how hatha yoga can aid healing and enhance aging. She completed the 50-hour program, Therapeutic Yoga for Seniors, with Carol Krucoff and Kimberly Carson at Duke Integrative Medicine, the 50-hour program, Yoga of Awareness for Chronic Pain, with Kimberly and Jim Carson at Oregon Health and Science University, and recently the 50-hour program, Mindful Yoga for Cancer, with Kimberly and Jim Carson at Duke Integrative Medicine. Marie continues to deepen her knowledge with the Carsons, as well as study yoga anatomy with Leslie Kaminoff and Amy Matthews within the Krishnamacharya tradition.
A recently retired school librarian with a zeal for lifelong learning, Marie invites all to join her exploring breath and mindful movement.

Elizabeth (Liz) Brooke views yoga as a way of life for health, calm, and clarity in this busy world. Her goal is to share yoga in a safe and accessible form in her Fun Flow Vinyasa classes with the added bonus of ever changing music! Elizabeth completed Birmingham Yoga’s Teacher Training Program in 2011 and is a 200-hour Registered Yoga Teacher (RYT 200) in Vinyasa and Ashtanga styles of practice with the International Yoga Alliance. Liz has studied a variety of yoga styles including Ashtanga, Bhakti, Kundalini, Restorative and Vinyasa Krama with Akasha Ellis E-RYT, Laura Tyree E-RYT, Heartwood Yoga, Becca Impello LPT YT, Michael Johnson E-RYT 500, and Terri Sellers RYT 200.

Kerry studied under Akasha Ellis, who trained him in the styles of Ashtanga and Kundalini Yoga. He received his RYT-200 hour certification (Yoga Alliance) in May 2015. Kerry is also a musician. This informs his yoga practice. Kerry studied classical concert guitar performance in San Francisco, California, obtaining his bachelors’ degree from the San Francisco Conservatory of Music where he studied with renowned performer and composer Dusan Bogdanovic. While on the west coast, Kerry enhanced his musical experience by delving into meditation, Indian classical music and ragas, eastern philosophy and martial arts. Kerry continues to incorporate eastern musical forms into his practice and regularly performs guitar with Aquarian and Kundalini chants and he has recently taken up the Sitar. Kerry often incorporates playing live music on occasion during portions of the practice such as in final resting pose or savasana. Kerry’s teaching emphasizes the basic principle that yoga is an art and science dedicated to creating union between body, mind and spirit. Kerry’s intent is to assist the practitioner in learning to use the breath and body to foster an awareness of themselves as individualized beings intimately connected to the unified whole of creation. A lawyer by profession, Kerry has found that a dedicated practice of yoga has allowed great abundance in his life even in the face of many great struggles, pains and losses. Kerry strives to help the practitioner find their own path towards balance and equanimity so as to live in peace, good health and harmony with the greater whole. Kerry is dedicated to his own daily practice of Ashtanga yoga. This is the form Kerry emphasizes as a teacher. Also known as the eight-limbed path, Ashtanga yoga is expressed from the core of Patanjali’s Yoga Sutra, written approximately 200 AD, that forms the structural framework for yoga practice. Ashtanga is a beautiful but disciplined type of yoga based on eight principles and consisting of a series of poses (asanas) executed in swift succession, combined with deep, controlled breathing.

After laughing her way through her first yoga class in 2001, owner and instructor Annie Damsky became a committed yoga practitioner in 2004. She achieved her 200-hour Yoga Alliance instructor certification in 2009 at Birmingham Yoga and the following certifications in Children’s Yoga: YogaFit Kids (2009), It’s Yoga Kids (2011), Dancing Spider Kids Yoga (2013). Annie has an additional certification in Prenatal Yoga through a 32-hour Pranakriya training (Yoga Alliance accredited). Annie has been fortunate to attend the workshops of Doug Swenson, Doug Keller, Rolf Gates, Sean Tebor and Dave Williams and feels like each class she teaches is a short workshop, especially with the knowledge she gains from her gurus of all ages. Annie is an active member of Sweet Om Alabama and relishes any opportunity to come together and share yoga as a community.

Kimberly Drye is a 500-hour certified yoga instructor in the Birmingham, AL area. She trained primarily with Iyengar trained instructors in Asheville, NC including Lillah Schwartz, Cindy Dollar, John Friend, Roger Cole, Michael Johnson, Aadil Pakhiavala, and Matthew Sanford. Kim’s intention is to move students into a deeper understanding of themselves and the joy that lies within their hearts. HereNowYoga is Kim Drye’s personal yoga brand under which she offers therapeutic private appointments, workshops, special events, and retreats. Information about these classes and events can be found at herenowyoga.com, where she also regularly posts yoga sequences, news, and musings about current yoga topics. The technical skills she has as an instructor that set her apart include poignant language skills, excellent demonstration technique, and an in-depth understanding of alignment principles and therapeutic applications. Her classes are a mix of alignment and flow.