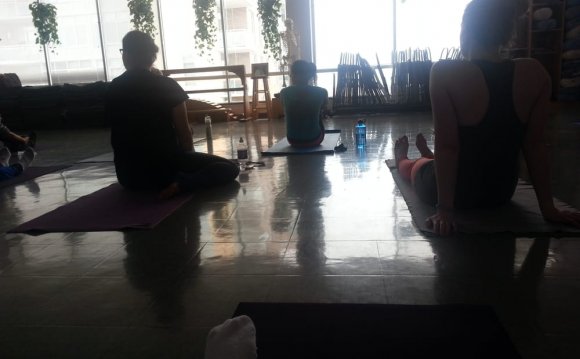 Joined Yoga District three years ago! Since then she has pretty much been running the show, leading with her heart forward. Even if you’ve never met her, is responsible for much of what you experience at Yoga District. Seeing the connection between her work and Yoga District’s heart-forward mission, Purnima performs every duty, large or small, with a lot of love. grew up on an ashram, is a touring devotee of the hugging saint, and might be seen taking a selfie now and again. We hope you enjoy interview and please join us in celebrating her three years of loving service!

How long have you served the Yoga District community?

I’ve worked at Yoga District for three years, as of August 21 (though sometimes it feels way, way longer than that!)

How did you come to your administrative role at Yoga District?

In 2012, I moved to DC to live at Ashram (my spiritual teacher and mentor) in Potomac, MD. I had just returned from a two-month tour with Amma around the United States as a seva staff volunteer. I had been living in Philly beforehand with some friends after time in college to figure out what was next. A couple weeks after arriving in DC, a friend of mine mentioned that her yoga studio was hiring an administrative person to take on a big role. Having grown up in (an Ashram community in Virginia founded by Sri Swami Satchidananda) with some computer and admin. experience, I reached out to Jasmine. We soon met at Open City in Woodley Park for an interview (though it more felt like two old friends reconnecting over lunch) and voila — before I knew it, Yoga District became of one the most important and valued (and time consuming!;) parts of my life.