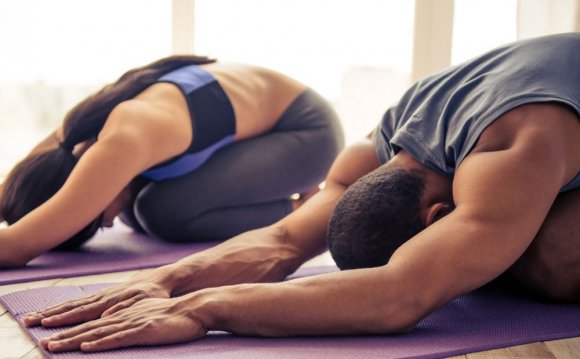 Between 800-1700 A.D. yoga went through what is known as the Post-Classical period. During this time historical yogis Matsyendaranatha, Gorkshanatha, Cauranginatha, Swatmaram Suri, Gheranda and Shrinivasa Bhatt popularized Hatha Yoga.

This style of yoga focuses on the physical poses rather than the spiritual elements of yoga. Hatha Yoga, or forceful yoga, is meant to increase the energy of yogis by taking them through different physical poses or postures. Hatha can also mean "adamant, " according to an article on Hatha Yoga on Isha Yoga's website. A practitioner must be adamant about his willingness to push out of his comfort zone. You are supposed to get comfortable being uncomfortable, pushing past your mental limits to see what you are capable of.

At most yoga studios or gyms, "Hatha yoga" refers to a gentle combination of seated and standing yoga poses. As "Hatha" is an umbrella term for all physical yoga, flowing practices such as vinyasa and Power are also Hatha yoga, but aren't labeled as such.

The forceful style of yoga stands in stark contrast to Yin Yoga, which was popularized in the 1970s, making it one of the most recent additions to the world of yoga. Whereas many types of yoga focus on pushing past physical boundaries, Yin Yoga takes a much more laid-back approach. It is the calm yin to the more aggressive yang of other types of physical yoga, balancing out the other practices with its slow and methodical nature.

Yin Yoga is designed to gently put tension on connective tissues like ligaments, tendons and fascia, which is a layer of tissue that surrounds your muscles. Instead of moving through poses in a matter of seconds without letting the muscles relax, Yin Yogis hold a pose for a matter of minutes (sometimes even 20 minutes) and relax into their poses. They wait until their muscles relax enough to let their joints move to the end of their range of motion, where the tension of the stretch moves to the connective tissue.

The benefits of an active Hatha Yoga are in increased fitness levels and other physical characteristics. A 2014 study in the International Journal of Yoga, for example, found that Hatha Yoga practice increased balance in young adults. It also increases mental and physical endurance.

Yin Yoga increases the health of your connective tissue, making the more resilient. It is also a relaxing form of yoga with an emphasis on long and slow breaths. In fact, being relaxed is one of the keys to a successful Yin practice, according to an article written by Yin master Bernie Clark. It is more of a cooling down and relaxing form of yoga than Hatha. In fact, you don't even need to do a warm-up to begin your Yin Yoga practice.