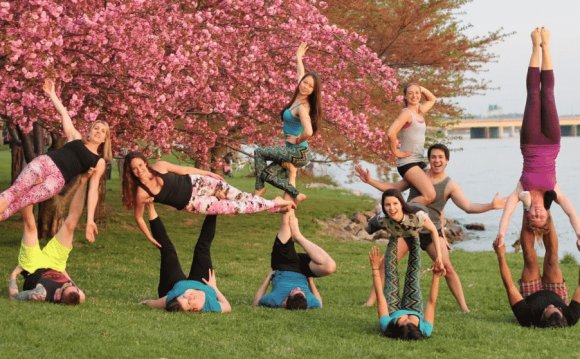 Michèle Gordon understands firsthand the intrinsic benefits of her MiRé Yoga business located in her hometown of Kensington, Md. Gordon opened the practice in 2014 following more than a decade as a Svaroopa Yoga instructor in Rehoboth Beach, Del.

Previously a 25-year special education teacher on the eastern shore of Delaware, her demanding occupation caused her to seek remedies for physical relaxation and relief of stress. Driving by The Yoga Studio in Rehoboth Beach on a regular basis, a blue sign displaying the traditional “Om” meditative chant had always caught her eye. Gordon’s curiosity about the practice of yoga was piqued, leading her to sign up for a class in 2001.

She quickly learned how an easily learned disciplined style of movement could help her achieve her goals of ridding her body of the cumulative tension and anxiety common to anyone experiencing the normal bustle of modern life.

Gordon would eventually become an instructor of Svaroopa Yoga at the Rehoboth studio, learning from prominent practitioners from the Master Yoga Foundation in Philadelphia who had also trained across the globe. She continues to teach a monthly class in Rehoboth in addition to conducting classes in Kensington, just north of Chevy Chase in D.C.-neighboring Montgomery County. Gordon offers her classes at Allay Yoga studio in the historic Kensington Antique Village, at 10419 Armory Ave. near Howard and Connecticut avenues.

Gordon, now a Certified Svaroopa Yoga Teacher (CSYT) and Registered Yoga Teacher with more than 500 hours of training (RYT-500) certified by the Yoga Alliance, jokes that her extensive training “cost me more than my master’s degree at GW” in D.C. “Svaroopa Yoga instructors typically spend more hours training than any other style of yoga, ” she notes.

“The poses are deceptively easy, ” Gordon emphasizes in describing the hatha style of yoga, “but create deep and profound change.” Focused on releasing spinal tension, the process “all begins at the tailbone, ” she explains, “from ‘tail-to-top’ at the back of the neck in a series of sequenced poses.” She strives for maximizing individualized attention through small class sizes, enabling instruction in correctly aligned poses for the greatest physical benefit.

“All symptoms and ailments are related to the tailbone area, ” Gordon asserts. Noting that the practice is “not exercise” in the traditional sense, poses are designed “to promote core opening” allowing a release of tension from the muscles adjoining the spine and creating a state of “bliss” and relaxation.

“The purpose is to release deep core muscle tension, ” Gordon says, utilizing a “slow and restful” process to attain a “restorative” state. Stacked blankets are used to prop the body and support the spine during poses designed to “open the entire length of the spine.” These are always undertaken in the same order, such as the “Magic Four” series that decompresses the spine.

“In my classes we also concentrate on full breathing techniques, ” Gordon says, calling it “more important than the poses, ” and beneficial for reducing sleeplessness.

“Attitudes about yoga are changing, ” Gordon says, “as more people become acquainted with the techniques and learn how incredibly beneficial it can be to one’s physical wellbeing. The definition of yoga is the healing of the mind and body, ” she adds, “allowing them both to re-set.”

She encourages anyone interested to sign up for a complementary class. Gordon knows how much she has benefited and is eager to share that opportunity with others.