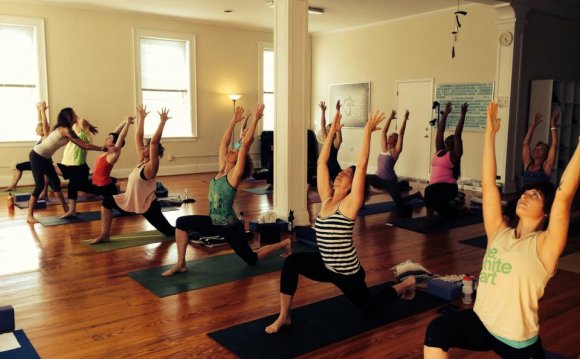 Susan is the director of The Health Advantage Yoga Center. She has been a yoga practitioner since 1989 and began teaching in 1997. Susan has studied with many world-class teachers, focusing on alignment-based styles. She received a BS degree in computer science and linguistics from the College of William and Mary and she particularly enjoys applying the logic she learned while programming to the progressive teaching of yoga poses. Susan's approach is warm and clear with an appreciation of individual differences.

Brandi began practicing yoga in 2009 to increase her strength and flexibility, and found that the inner calmness and joy she experienced provided extraordinary benefits. She completed the HAYC Teacher Training program in 2015 and began teaching the same year. Brandi enjoys teaching with joy and humor, hoping to inspire her students with the same love and dedication that she feels for yoga. When not practicing yoga, Brandi enjoys traveling and spending time with her family.

Kelly has studied yoga since 1990. She received her teaching certificate in 1994 and has taught at HAYC since 1996. Kelly has studied many different alignment-based yoga styles with numerous experienced teachers over the years. They have helped to shape and deepen her yoga practice and they inspired her to love the yoga she teaches. Her love for life after breast cancer and other calamities has taught her to appreciate her yoga even more each day. Her goal is to open the hearts of all who are in pain.

Amy is a graduate of the HAYC Teacher Training Program. She has been practicing yoga for 15 years and teaching since 2008. She is also a certified mindful eating instructor and she created a yoga program for Inova Hospital's medical weight loss program to help patients focus on cultivating body awareness. Besides guiding her students in the physical benefits of yoga, Amy teaches self-calming techniques to her students and strives to help foster self-kindness and mindfulness within their yoga practice.

Doug has a strong background in the alignment-based styles of Iyengar and Anusara Yoga, as well as in yoga philosophy and yoga therapy. He is a regular columnist in the internationally renowned magazine Yoga International and is the author of several books covering all aspects of yoga practice. He holds a Master’s Degree in Philosophy from Fordham University, and travels nationally and internationally, teaching workshops in philosophy and pranayama as well as hatha yoga. And of course he teaches regularly at the HAYC!

Kelly started as a student at HAYC in 1993 and completed the HAYC Teacher Training Program in 1999. She studies therapeutic yoga intensively, drawing upon her own experiences as well as her work as a Neuromuscular Massage Therapist to teach the healing power of yoga to her students.

Janet began her study and practice of Hatha Yoga in 1972. She has taught yoga since 1987 and completed the HAYC Teacher Training Program in 1995. Janet has studied yoga with Betsey Downing, Tias Little, Desiree Rumbaugh, Rodney Yee, Sarah Powers, and Doug Keller.

Shawn began her yoga practice at HAYC in 1999 and completed the HAYC Teacher Training Program in 2008. Shawn holds a degree in International Studies from William and Mary and a Masters in Education from Virginia Commonwealth University. As a high school Spanish teacher, she brings a passion for teaching and an appreciation for individual differences.

Mary began her study of yoga at HAYC in 1998, and she completed the HAYC Teacher Training Program in 2006. She has also completed the Level I Anusara Teacher Training, the Radiant Child Yoga Program Levels I & II, and Mini Yogis Teacher Training. She continues to expand her knowledge of yoga by attending workshops, classes, and teacher trainings. She is also a Massage Therapist and is certified in Thai Yoga Massage. Mary dedicates her teaching to making yoga a joyful experience and to bring calm and balance into her life and the lives of others.

Erin began her yoga practice at HAYC in 2005. She completed the HAYC Teacher Training Program in 2010, qualified as an Elise Browning Miller Yoga for Scoliosis Trainer in 2012, and continues to broaden her own studies. Drawing on her past experiences as a competitive figure-skater and childbirth educator, Erin enjoys light-heartedly encouraging others to tune in, find their inner strength, and move mindfully.