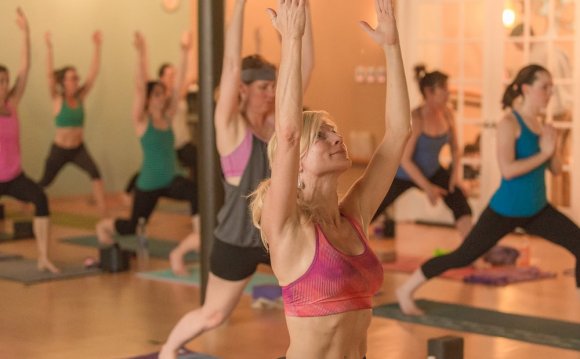 Who needs a hot yoga studio in August in the Mid-Atlantic? All you really need to do is just step outside and find a flat spot with a good view. Hot and humid rules the day.

Dirt Farm Brewing sponsored a hot yoga class Sunday on their beautiful mountain terrace that overlooks Loudoun Valley. The view was awesome, the temperature was near 90 degrees under a bright sun, and the beer was cold. It was a perfect combination for hot yoga.

Yoga instructor Colleen Gillis led the 75-minute class. The prep for class was sunscreen, and the extended time in the direct sunlight reminded me of broiling out on a beach but without a nearby ocean for cooling off. The mountain air with a light breeze, however, added an element that most hot yoga studios are missing — a refreshing smell. It was a cool experience in a hot kind of way.

A spider on the mat and sun in the eyes are not common experiences in a hot yoga studio but they occurred in Sunday’s class. And during class, when the airplane pose was called, with perfect timing, a loud jet flew overhead. There were a few chuckles in the class.

After eagle pose was called, a large bird dipped overhead. One yogi remarked, “Too bad it’s not an eagle.” Another said, “I think it’s a turkey buzzard.” A third remarked, “We must not look too good.”

Hot yoga in the outdoors with a mountaintop view is a great experience. The summer heat makes it possible to work up a good sweat, but don’t try this same routine in January or you may end up doing snow pile yoga.

After the yoga class, flights of beer were served to the hot and sweaty yogis. Many participants changed clothes and found a table with a view and stayed for lunch.

Flatbreads, nachos and other types of fare were available for order with the beer. Hanging out and eating at the brewery was a relaxing after-yoga experience that made both the class and the drive out to Bluemont, Va., well worth the effort.


Flip the palm and reverse.
Dirt Farm Brewing, visible in the background, was the source of the after-yoga beer.
Shannon Teel takes a standing split pose with Loudoun Valley in the background.
Colleen Gillis strikes a cool yoga pose at Dirt Farm Brewing.
Dancer’s pose.
The author struggles with a simple wheel pose knowing that a cold beer waits for him when he’s done.