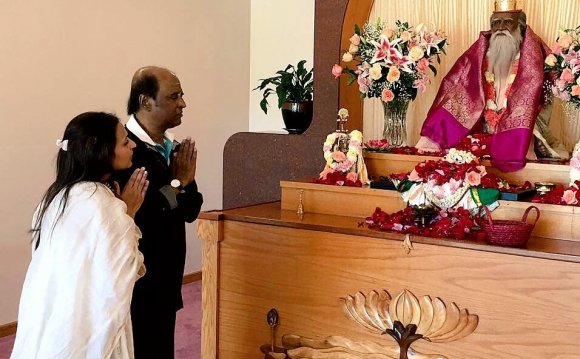 Superstar Rajinikanth and his daughter Aishwarya offered prayers to his guru Satchidananda at Lotus Aashramam (Yogaville Ashram) in the U.S. on Sunday, and the pictures have gone viral on social media.

All the fans of Rajinikanth are well aware of his spiritual side and he is an ardent devotee of Raghavendra Swamy. He is known to take off on spiritual sojourns every now and then. He makes his Himalayan Trip to recharge himself at the Holy Caves of Babaji after the release of his movies. He considers Swami Satchidananda Saraswati as his Guru.

After wrapping up the shooting of "Kabali, " Rajinikanth left for a family vacation to the U.S. and he was accompanied by his wife Latha and daughter Aishwarya. Having enjoyed the holidays, he is set to return to India on July 20. He visited the Satchidananda Saraswati's Yogaville Ashram on Sunday.

Later, his daughter Aishwaryaa R Dhanush took to her Twitter page to talk about their visit to the Yogaville Ashram in Virginia. She also posted a couple of photos that feature her and the superstar in the temple. She wrote: "Appa n I @ his guru Satchidananda's "Lotus all faiths temple" 30th anniversary Yogaville Virginia â˜º #BlessedSunday."

Rajinikanth is gearing up to release his most-anticipated movie "Kabali, " which is slated to hit screens around the world on July 22. Written and directed by Pa. Ranjith, the movie features the superstar as an aged gangster fighting for the people of his community. Its promos have created a lot of curiosity among viewers and the film is expected to become a big money spinner at the box office.