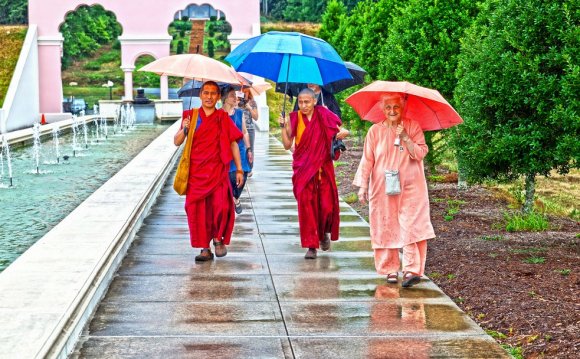 Ramaswamy, as he was named by his parents, was born on the 22nd December, 1914, as the second son of a very devout couple Sri Kalyanasundaram and Smt. Velammai, at Chettipalayam, Tamilnadu. After pursuing a highly successful business career, he gave up worldly life on the death of his wife. He visited many sacred places of pilgrimage, stayed in Ashrams with holy saints like Sadhu Swamigal, Sri Aurobindo, Swami Chidbhavananda and Sri Ramana Maharshi, and finally arrived at Rishikesh in 1949 and met Swami Sivanandaji Maharaj upon which he felt he has reached his final destination and his Guru. He was initiated into the holy order of Sannyasa by Swami Sivananda giving him the monastic name of Swami Satchidananda, on the 10th of July, 1949. In February, 1951, Sri Gurudev asked him to undertake an All-India Tour, during which he gave lectures, taught Yoga Asanas and organised Branches of the Divine Life Society.

Knowing his ability in the work of management and also proficiency especially in Hatha Yoga, Swami Satchidananda was asked by Sri Gurudev to go to Ceylon, now known as Sri Lanka, to build up a centre of the Divine Life Society, in response to an ardent request by a lady called Swamy Satchidananda Mata. She was a very devoted lady and considered Gurudev as God himself. But she had not the ability to maintain the Centre being a lady herself and not very much acquainted with the knowledge of the Sastras, much less of Yoga. So Swami Satchidanandas going there was a God-sent, and he actually fulfilled this pious wish of Sri Gurudev. Having seen that the Centres in Sri Lanka are raised to the status expected by Sri Gurudev, he moved further to the West until he established himself in the United States of America where he has his Yoga capital in Buckingham, Virginia.