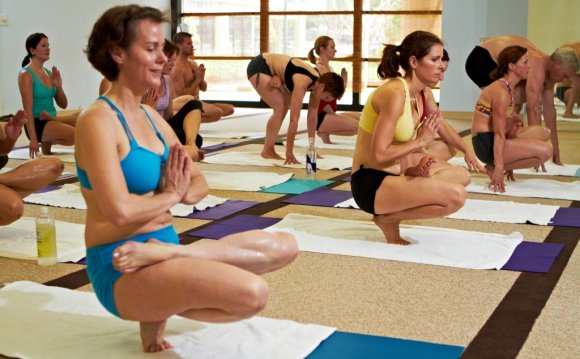 That’s the Bikram Choudhury shouting at you in one of his “Torture Chambers”. Bikram through experiment had learnt fifty years ago that the wrong way of doing any posture would not help you.

Bikram says, “If you follow my instruction and do my yoga postures Sequence to the best of your ability, you will live a better, healthier and more peaceful life.”

Yogiraj Bikram Choudhury is the founder of the worldwide Yoga College of India™. Born in Calcutta in 1946, Bikram began Yoga at the age of four with India’s most-renowned physical culturist at that time, Bishnu Ghosh, the younger brother of Paramahansa Yogananda (Author of the most popular book on Yoga, The Autobiography of a Yogi, and founder of the Self-Realization Fellowship in Los Angeles).

Bikram practiced Yoga at least four to six hours every day at Ghosh’s College of hysical Education in Calcutta. At the age of thirteen, he won the National India Yoga Championship. He was undefeated for the following three years and retired as the undisputed All-India National Yoga Champion.

At seventeen, an injury to his knee during a weight-lifting accident brought the prediction from leading European doctors that he would never walk again. Not accepting their pronouncement, he had himself carried back to Bishnu Ghosh’s school, for he knew that if anyone could help to heal his knee, it was his teacher. Six months later, his knee had totally recovered. Ghosh was a celebrated physical culturist and the first to scientifically document Yoga’s ability to cure chronic physical ailments and heal the body.

Bikram later on devised the 26 postures sequence, which work irrespective of age groups. These 26 postures series has a profound healing power on your body and mind. He founded Bikram’s Yoga College of India. Bikram has shown the light of healthy life to millions of people around the world.

Bikram is the most respected living Yoga Guru in the world. He has written books on Bikram Yoga. These books are wonderful work for the entire yoga world. Bikram is also singer. His songs are really refreshing and have a soothing effect on the mind. Bikram conducts workshops, lectures and seminars throughout the world. It’s a wonder to experience one of his classes. He will tell you where your weak point is while doing Bikram Yoga Posture. He will not stop until you come out at your best

” According to Bikram “you will not get the intended benefits until it is done hundred percent correct”.