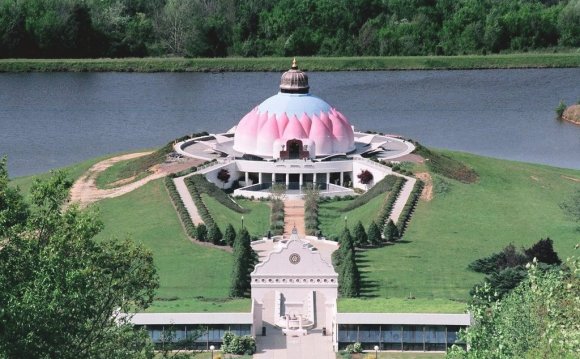 SWAMI SATCHIDANANDA WAS THE FOUNDER of the Yogaville ashram in Buckingham County, Virginiabegun in 1979and its satellite Integral Yoga institutes in New York, San Francisco and elsewhere.

He was born in southern India in 1914 and married young but, after his wifes death, left his children and embarked at age twenty-eight on a full-time spiritual quest.

In 1949 he was initiated as a swami by his own spiritual master, the renowned Swami Sivananda, having searched the mountains and forests of India to find that sage in Rishikesh. His monastic name, Satchidananda, means Existence-Knowledge-Bliss.

He came to New York in 1966 as a guest of the psychedelic artist Peter Max.

Word soon spread that Satchidananda had cured the kidney ailment of a disciple by blessing a glass of water.

He spoke at Woodstock in 1969, having been flown in via helicopter to bless the historic music festival:

I am very happy to see that we are all gathered to create some making sounds, to find that peace and joy through the celestial music. I am honored for having been given the opportunity of opening this great, great music festival (Satchidananda, in [Wiener, 1972]).

Even prior to Woodstock, Satchidananda had sold out Carnegie Hall, being viewed as one of the class acts in the spiritual marketplace.

His views on nutrition were solicited by the Pillsbury Corporation.

By the beginning of the 1970s, thousands of Integral Yoga devotees studied at fifteen centers around the United States. By the late 70s, Satchidanandas (1977) followers numbered in the hundreds of thousands. Included in that group have been the health and diet expert Dr. Dean Ornish, model Lauren Hutton, Jeff The Fly Goldblum, and Carol Youve Got a Friend King, who donated Connecticut land to the yogis organization.

Having acquired other, warmer property for Yogaville in Virginia, Sivananda Hall was built there, complete with a wooden throne for the guru, set atop a large stage at one end of the hall. Life for the poorer subjects within that 600-acre spiritual kingdom, however, was apparently less than regal:

The ritual abnegations of the sannyasin [monks] included a pledge to dedicate my entire life and renounce all the things which I call mine at the feet of Sri Gurudev [i.e., Satchidananda]...
Source: www.strippingthegurus.com