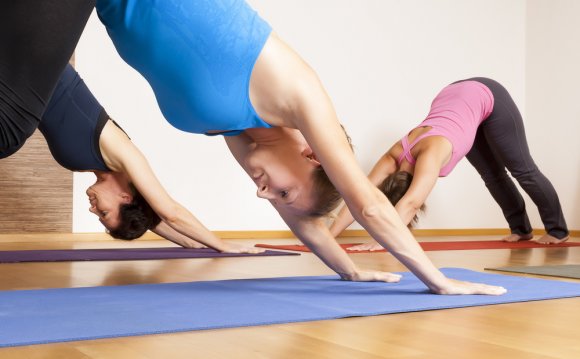 One September morning in the middle of a yoga class, Yvonne Simon dropped into Child’s Pose. On the face of it, this would seem unremarkable. But for Simon, who’s 45 and lives in Manchester, New Hampshire, the moment was nothing less than stunning.

The class started like many others in Simon’s decades of practice. She entered class with high expectations. If the person practicing next to her could manage to do a full Urdhva Dhanurasana (Upward Bow Pose), so would she, no matter how much her wrist hurt. In fact, in most classes, she found herself playing a private little game: She’d look around the room, identify the most experienced yogi and the newest—and then assign herself a score somewhere in between. She usually rated herself a 7.

Sometimes she tried to check her ambition at the studio door, but it always seemed to follow her in. This tendency wasn’t confined to yoga class. A competitive swimmer and straight-A student when she was young, she grew into an industrious adult, moving through careers in teaching and publishing. In 1996, she became an entrepreneur, cofounding a software company, Six Red Marbles, based in Cambridge, Massachusetts.

Whatever the task, Simon set herself exacting standards. “I can’t remember being any other way, ” she says. “My parents were very ambitious, and it was part of my upbringing: You do as much as you can, and you do it all the time. You’re always supposed to be striving.”

She’d flirted with burnout more than once over the years and would periodically try to temper her ambition. At one point she left teaching and went to work at Crate and Barrel, a job she thought would consume her less. “In six months, I was made floor manager, ” she says, laughing. “I couldn’t get away from my ambition. It was always there.”

So in yoga class that September day, it was no surprise that Simon was pushing herself—even though she’d recently had abdominal surgery. Then, about midway through the class, she started to struggle. “I felt like my heart was going to pop out of my chest, ” she says. “And I thought, this is not what we’re supposed to be doing here. It’s time to let yourself off the speedway.”

As the others continued their vigorous practice, Simon sank into Child’s Pose. To her surprise, the world didn’t end. She didn’t even feel embarrassed. “It was a huge relief, ” she says. “And I thought, Wow, I’ve been doing this all wrong all these years.” She wasn’t referring only to yoga class. The insight changed the way she handled the rest of her life.