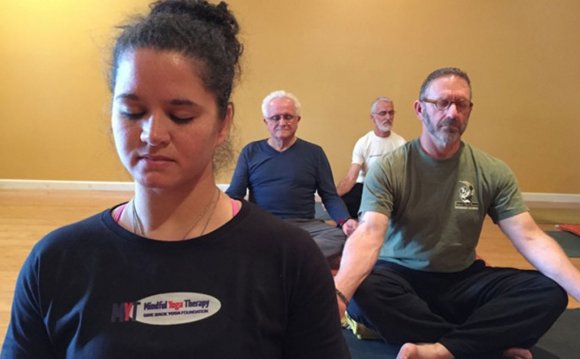 Ann Stevens was leading a yoga class at a Virginia college when a teacher walked into her classroom. “Will you let someone in a wheelchair in your class?” the teacher asked Stevens.

Previously, Stevens had worked with a retired admiral to bring adaptive yoga into the Wounded Warrior population. And her mindset from that time hadn’t changed. “I let the girl [in the wheelchair] come in the class, ” said Stevens. “Some days she wanted to transfer. Some days she didn’t. But she said, ‘I’ve done more movement and I’ve got more out of this than anything else.’”

Since opening Studio Bamboo Yoga in Virginia Beach, Virginia, Stevens has offered adaptive yoga to her students. Whether in private sessions, a weekly adaptive yoga class or even in traditional yoga classes, she wants everyone to have access to yoga’s benefits. Adaptive yoga is different than simply modifying or varying yoga movements — typically it’s only parts of a pose — but Stevens said it still looks to give yogis the same benefits of a traditional yoga class.

And several of her adaptive yoga students attend traditional yoga classes in her studio as well. For instance, one student of Stevens is in a wheelchair and attends the regular classes. “She doesn’t let her disability make her disabled, per say, ” said Stevens.

Most of Stevens teachers at Yoga Bamboo have gone through an adaptive yoga workshop, so they know how to work with the physically limited population. “At our studio, we don’t work with just the healthy, fit people. We work a lot with the older community, as well as wounded warriors or people with neurological disorders, ” explained Stevens.

One of the keys to success in teaching adaptive yoga is to get out of your own head. Stevens explained an instructor or teacher knows how a pose is supposed to look, working to have the student mimic it. “We really work more toward sensation and less doing, in the adaptive format, ” said Stevens. “Really feeling the pose from the inside.”

She also said the teacher must be present. Yes, that’s true for any yoga class, but Stevens stressed the importance of this with the adaptive yogi. This population can really benefit from yoga, explained Stevens, and she encouraged other studios to look into offering adaptive yoga.

“I think yoga should be for every body, and I don’t mean like ‘everybody’ one word. I mean ‘every body, ’ as in two words. Every. Body, ” said Stevens. “I really feel like this is a population that really can benefit by the practice of yoga, and just because they might be in a wheelchair or what not doesn’t mean they still can’t practice.”