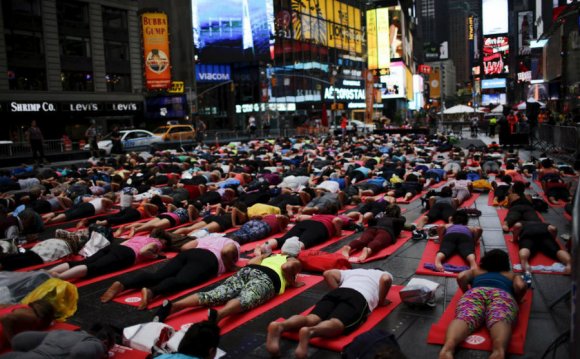 Two years ago I wrote a popular post titled Yoga Body: The Conspiracy. At the time it was very warmly received, generating thousands of hits, hundreds of shares and loads of positive comments. But lately the commentary hasn’t been very affirmative. In fact, its been making people pretty angry. One yoga teacher was enraged enough to call me an ignorant, lazy, pissed off “fat chick”. Nice. So what I wondered, was suddenly getting people so upset?

A lot of commentators disagreed with my claim that the ‘perfect’ yoga body used to sell yoga mats, clothes, DVDs, books, workshops, festivals, retreats, studio memberships, etc. was not a healthy ideal, that it was a body overworked and underfed. They saw it as a glowing icon of inspiration, the natural outcome of a wholesome yogic lifestyle (i.e. self-discipline and dietary control). And as one person pointed out, if I didn’t have a yoga body- well, clearly I was doing yoga wrong.

Others were distressed because they felt I was making assumptions prejudicial to the naturally thin. (Just because a women is skinny doesn’t mean that she diets or has a narcissistic obsession with working out.) All bodies, fat or thin, are just fine as they are, and it was hypocritical of me to talk about body positivity while being part of the body hating problem.

Now I admit I see their points, I am far too pleasure-loving to attend butt burning yoga boot-camp, and whenever I see a yogini devoid of body fat I suspect her of working hard to attain that physique. But it’s important to acknowledge that my post speaks for the large majority of women, women who carry a little more adipose tissue than the models of Lululemon, women for whom achieving the ‘yoga body” does involve constant work and dietary restraint. (Its whether we’re willing to pay the price, that is the million dollar question.)

This doesn’t mean I’m dissing women on the low-end of the body fat spectrum. I recognize that for some women (as one of my naturally thin friends pointed out) the yoga body is equally unattainable. Because while it may be girlishly slender in the waist and thigh, it’s definitely womanly in the breast and buttock department. Yoga Barbie anyone?

And I’m not being facetious. Just google “yoga body” and you’ll find your screen flooded with young, white, beautiful women whose lithe bodies are either executing some advanced posture requiring the strength and bendiness of an Olympic Gymnast or are sitting in Lotus, hands in prayer, eyes closed, their enraptured faces evoking beatific female saints who denied the flesh in search of transcendence.

Most of these women appear against blurred minimalist backdrops of sea, tropical greenery or spartan studio walls. They do not exist in relation – to either people or their environment, their bodies are the sole and dominating focus of the photograph.

And whether these images originate in corporate advertising, stock photography, or the ubiquitous yoga “selfie”, their taut torsos, rippling muscles and cellulite free thighs, testify to one thing. That the yoga body is a body brought virtuously under control. It is the physical manifestation of the inner strength, willpower, discipline and moral fortitude necessary to achieve it.

And isn’t this why the yoga body flourishes as an icon of yoga culture? Because haven’t we all, bought in to the ideology, as yogi J.Brown writes “ that pushing our physical capabilities is how we utilize practice to grow as people”. That working harder to be better, more healthy and spiritually pure means taking “ the body just past the limit usually thought possible”?

The booming popularity of 30 Day Yoga Challenges certainly exemplifies this conflation of fitness and spiritual development. Here is a collection of copy promoting various challenges currently offered by studios across North America : Strive to complete 30 classes in 30 days! Completing your challenge will require self-control and sacrifice. You can create a whole new way of being. Be Better Than You Were Yesterday. Empower yourself and transform your body and mind in 30 days.

This gets at the reason I think my post has been getting people so riled up lately, it calls into question that great sacred cow of 21st century yoga -that challenging and controlling our bodies is how we grow our souls.

Despite our pretensions that the yoga body is the natural outcome of yogic discipline and ‘ healthy’ lifestyle, it is certainly not the body ‘au natural’. It is achieved through hours of pure labor, hours spent transforming the dross matter of our flesh into something higher, more refined, something beautiful and spiritually pure. Has the proverbial bed of nails become today the penitent daily workout, as we overcome our weakness, our laziness, our unruly appetites?

It’s an obvious point that whether the yoga body is being sold to us to by big corporations or our local yoga studios, it’s purpose is to keep us striving. Because the more we keep striving, the more we keep buying. Into books, DVD’s, workshops and challenges that tell us with this program or celebrity teacher, we can up pull our bootstraps and finally get it right, be right.

I agree with popular blogger Roseanne Harvey that its high time the yoga body “ be reclaimed from Google, reclaimed from marketers, reclaimed from a fragmented culture that has mixed messages and ideas about the human body.” And during her recent quest to achieve her own yoga body in 21 days, Harvey attempted to do exactly that. Because between her glowing accounts of new healthy eating habits and core strengthening routines, Harvey did something really subversive. She posted pictures of herself looking FAT – online – for all the world to see.

Harvey publicly exposed what she calls the shadow body, the pictures of our shame and self loathing, the images quickly and furtively deleted, the images we hide. Harvey writes “Documenting my “shadow body” and posting it all over Facebook took a tremendous amount of courage, and left me feeling vulnerable, yet empowered.” And here lies a valuable cue – because until we make peace with this “shadow body” we will never be free of the fear that we are grotesque and unlovable just as we are.

I have to admit, as enlightened as I may feel myself to be about body image issues, I would rather submit to a dentist drill than publicly post fat pictures of myself on the internet. And when it comes to relentless self-improvement, I’m addicted as anyone to the possibility that with just a little more discipline and elbow grease, the right diet and the right derrière flattering yoga pants, l can bring forth into existence that, super-together, uber-organized, blissed out, svelte yogini version of myself. In short, my yoga body will prove I am in control of my life. Yet I well know the price I pay. Self–acceptance. Being present with gratitude and reverence for the life and the body I have now.