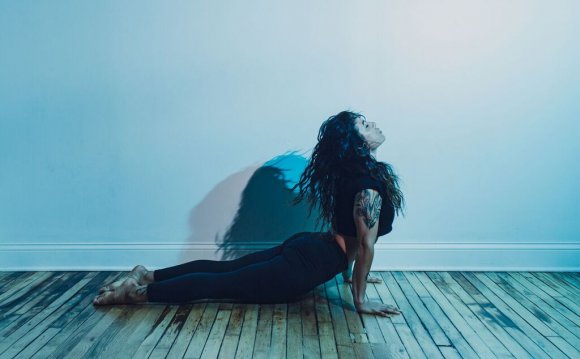 Mention nude yoga to the average person, and you're likely to get a giggle or a squirm, or maybe a joke about downward dog. Ask Amy Patterson and she might giggle too, or show an interesting pose she discovered on Instagram. But she also gets serious. Naked yoga, she said, "has absolutely changed my life."

Mention nude yoga to the average person and youre likely to get a giggle or a squirm, or maybe a joke about downward dog.

Ask Amy Patterson and she might giggle too, or show an interesting pose she discovered on Instagram. But she also gets serious.

Naked yoga, she said, has absolutely changed my life.

Prior to this practice I, like most women, really struggled with a lot of body-image issues and constantly not feeling like my body is good enough, not beautiful enough, not fit enough, not thin enough, she said. And I come to this practice and most of those thoughts have pretty much been eradicated from my daily life.

The 20-year-old Worthington resident started practicing, and teaching, naked yoga this summer. At a recent womens class that she guided at the Dharma House in Worthington, she encouraged the group to be acting from a place of gratitude, taking this time to be thankful for your body for all the support that it provides you ... thanking yourself for this ability to be real and true and authentic to yourself.

Nude yoga has been practiced in the United States since at least the 1960s. But instructor Michael Lange of Powell, a native of Germany, said he had trouble finding any nude activities when he came to Columbus 20 years ago. For him, naked swimming and other similar experiences that he had in Europe drew him to yoga and its naked practice. His first naked yoga class was at a retreat in upstate New York with a group from New York City.

But in just the past three years, the 57-year-old has seen three naked yoga groups start in Columbus, including the one he teaches, borne from his experiences with the Central Ohio Naturist Guy Alliance. Class sizes among the three groups tend to range from 10 to about 15.

Aaron King, Dharma House owner, is the most public about his classes. He and five other instructors teach four naked yoga classes there each week.

No matter what your body looks like, no matter what size you are, how much yoga experience you have, how much money. None of that matters when youre in a room full of naked people, and we are all vulnerable together, and were all on this even playing field, King said. And it's beautiful. Were all just people. Its all this beautiful experience if you allow it to be.

King has been teaching naked yoga for about two years, and recalls his first time taking a class. He was apprehensive, putting it off for months amid concerns that the practice might compromise what he felt was the true nature of yoga.

His palms were sweaty, his hands trembling a bit, his inner dialogue like two bullhorns in both ears at full blast. But partway through the class, he began to click into yoga gear and, at the end, as he lay face-up on his mat, he was sold.

I felt this incredible sense of courage and empowerment and pride. I didnt expect that to come, said the 37-year-old King. And I was free, and I was naked, and nothing bad had happened, and all of a sudden it was like all of those fears were just kind of washed away.

At Dharma House, naked yoga is part of the overall yoga offerings. The classes are open only to adults, and King does not do private naked-yoga classes.

There are no mirrors. Participants disrobe together right at the start of class, and some stay in the buff afterward while they chat and nosh on chocolate, fruit, nuts and ginger.

The lights are dim. At recent evening womens and co-ed classes, sunlight, candles and luminaries, fresh flowers and an essential-oil diffuser provided atmosphere.

These are not classes simply for the people whose bodies mirror magazine images. Participants were of every shape and size; some featured a patchwork of tattoos, others bore watches, bracelets or necklaces; some had more body hair than others; they came from all walks of life and had a range of job descriptions; ages spanned the early 20s to at least mid-50s.

What they had in common was a love for yoga and a willingness to be vulnerable.

Olivia Wilson, 27, of Gahanna, studied womens gender and sexuality at Ohio State University. She was raised by feminist parents, is passionate about body-positive activism and thought she was fearless. But she had to talk herself into her first class with Patterson, a friend: Why do I have to do things outside my comfort zone? she asked herself. Why do I have to practice vulnerability?"

Women, specifically in American society, are taught to feel ashamed of their bodies, she said, "so even in a safe space with someone I know very well, I still have to psych myself up for it."

This is hard, this is scary, she said. Its not that I have to face other people, its, I have to face myself in this form, and I think thats why a lot of people are like, Theres no way in hell I would do that.'"

Poses that have her facing her knees or feeling her belly against her legs made her realize new things about her body and to appreciate and love its capabilities.

Patterson noticed that she has cellulite above her knees: Two years ago that probably would have bothered me a lot. Now, I have this practice where Im just in my naked body and feel really OK, which is not an experience Id had for a while.

Blaine Butcher, 23, of Delaware, said that he, too, has learned to become more comfortable with himself through naked yoga and that once he gets started, he barely notices that hes naked.

Hes been doing the practice for about six months. He uses a towel to keep his mat free from sweat and said that some poses, including one called half pigeon, are easier to do without the constriction of shorts or sweatpants. He participates so he can have a well-rounded yoga experience and because he appreciates the calmness and openness of King, who hugs each participant at the beginning of class and asks that persons goals.

He acknowledges that there might be some awkward moments, but said that having instructors who are strong-minded, respectful and mature tamps that down.