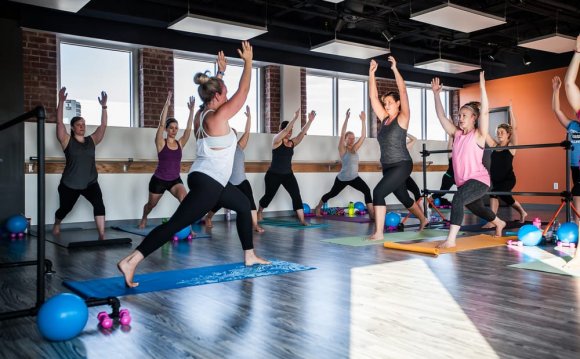 LACEY POULSON discovered yoga while studying Psychology and Women's Studies at the University of Central Florida. In an attempt to create school-life balance, she started exploring her practice at Kula Yoga in her hometown of Daytona Beach. She immediately fell in love with the physical, mental, and spiritual benefits of the practice. When she moved to Atlanta in 2014, Lacey found that spending time on her mat was the best way to ease the transition to a new city. She has been a dedicated member of the Westside Yoga community since its opening, and began teaching after completing an apprenticeship with our Founder, Amber Barry. As an instructor, Lacey encourages her students to love their bodies and practice where they are at today, whether this is their first yoga class or they have been practicing for years. She brings high energy to her heat building classes, focusing on moving with the breath. Lacey also serves as Westside Yoga's Studio Manager.

LENA PARISH loves yoga because it makes her feel stronger and more adventurous. She began practicing in 2004, as a way to complement her athletic lifestyle. A few years into her yoga journey, she was injured, and found that daily yoga practice brought pain relief and healing. After two years of daily practice, she felt called to become a teacher, and earned her 200 Hour RYT certification and 100 Hour Restorative certification at Nosara Yoga Institute in Costa Rica. As an instructor, Lena wants her students to have fun with their practice, and encourages them to try new things. She inspires students to trust themselves on the mat, knowing that confidence in the practice leads to confidence in all areas of life. Lena grew up in the small town of Warranton, VA on a farm. She went to high school in Richmond, VA and college at University of Alabama.

While studying in Thailand, SPENCER SCHIFF discovered asana as a practice for staying in shape. Over time, however, he realized that the benefits were much more than physical-he enjoyed how yoga changed him both mentally and spiritually, on and off the mat. He became a daily practitioner of yoga, and recently completed an apprecticeship with Westside Yoga Founder, Amber Barry. As a yoga instructor, Spencer's teachings focus on purposeful breathing, transitions, and postures that challenge and inspire his students to build heat and challenge their edge.

Yoga is a practice that fosters happiness and total body health. Our experienced teachers will help you live your yoga, on and off the mat.

As a childhood dancer, KELSEY REED ARMBRUSTER felt best when in tune with her body and mind. After a few failed few high school attempts with yoga, Kelsey Reed found her love for the practice in college, while navigating the challenges of her parents' divorce, heartbreak, and family addiction. Kelsey Reed has been an active yoga practitioner for the past 8 years. She received her RYT-250 hour training from Asheville Community Yoga Center in 2012 and has been teaching ever since. Yoga has taught her to be aware of her breath in every situation, for it is her compass home. Since earning her degree in Health and Wellness Promotion from UNC Asheville, she has dedicated her life to sharing this practice with the world to improve and motivate the health and growth of others. In finding yoga, she has found a shared bliss that transcends the unconscious to consciousness.

AMBER BARRY is one of the most experienced yoga instructors in the Southeast, inspiring total body wellness with her healthy and relatable approaches to yoga, mindfulness, and everyday well-being. As the Founder of Westside Yoga, Host of Crazy Healthy Radio on 1190 AM, and Inspirational Speaker at My Crazy Healthy Life, she is on a mission to rally her community around health-promoting disciplines founded in the ancient practice of yoga. Her passion for yoga stems from the personal transformation she experienced when she first met her mat 19 years ago. Yoga helped Amber reclaim her life after a car crash, which left her suffering and living in severe pain. Through her practice, she was able to completely rehabilitate her body. She now lives pain-free, and is thriving. A former marketing executive, she began her teaching and coaching career in 2001, and has been an outspoken advocate of mindfulness, movement, discipline, and plant-based nutrition ever since. Amber encourages her students to step outside their comfort zones, practice yoga daily, and trust the struggles on the journey to total body health. She grew up in the Washington, DC area, is a graduate of University of Virginia, and has lived in Atlanta since 1994.

REBECCA GALLA-JONES took her first yoga class in 2001, soon after her return to the United States, after spending six years in France. Moving back to the States was a difficult transition, that was made easier through regular yoga practice. Rebecca soon became a devoted yoga practitioner, exploring a variety of traditions, including Vinyasa Flow and Ashtanga. Upon completing her teaching apprenticeship, Rebecca taught her first yoga class in 2004, and has been teaching at highly respected studios ever since. Rebecca feels blessed to be a part Atlanta’s wonderful yoga community, and believes that everyone should feel proud of their practice, regardless of their level. Rebecca is also certified in yoga for kids and has been teaching children since 2009.

GABRIELLE BYNDLOSS fell in love with yoga while dealing with depression and anxiety. Yoga helped her connect with her breath, and use it as a force to control her mind. After attending weekly classes, she noticed that regular yoga practice changed both her mind and body. Yoga helps her grow in her passions, deal with frustration, build strength, and so much more. She earned her 200 hour RYT at Launch Awareness Yoga Centre, and uses creative sequencing to keep her students on their toes! In Gabrielle's classes, you can expect to be challenged to connect breath and body, and to laugh hysterically at yourself every now and then. When she's not practicing and teaching yoga, Gabrielle also works as a model and actress.

Westside Yoga Atlanta is conveniently located in Atlanta's Westside neighborhood, just around the corner from Buckhead and Midtown.