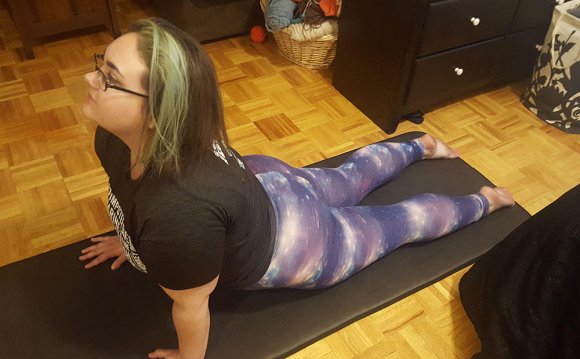 Christie Kanta Haran, MA, Certified Yoga Therapist, e-RYT-200, RYT 500, Thai Yoga Massage Therapist. Christie began her Yoga journey in 1994 when she attended a Yoga retreat at the Kripalu Yoga and Retreat Center, in Lenox, MA. In 2000, she earned her teaching certification through the Integral Yoga Teaching Academy, in Buckingham, VA. Christie has studied and practiced many different styles and traditions, but enjoys teaching and practicing Hatha. In addition to the physical and mental benefits of Yoga, Christie loves learning about the tradition, philosophy and science behind Yoga and includes these teachings in her classes. As a Yoga Therapist, she focuses on the therapeutic qualities of yoga and enjoys sharing the healing benefits of yoga with clients who have physical, mental, and emotional challenges. Christie has her Master's degree in Counseling and Sport Psychology and is also a Certified Stress Management Coach, Thai Yoga Massage Therapist, Wellness Coach, and a Level 1 CrossFit Trainer. KANTA, her spiritual name, given to her by her Guru (teacher), Sri Swami Satchidananda, means lovely, brilliant, and lustrous.

After being told for years that she “should really try yoga, ” Monica finally decided to give it a try and started practicing the physical postures in her college dorm room using yoga videos she found online. A few years later, she found her way to Inner Power Yoga and began practicing with Ursula Cox and the many wonderful teachers there. For Monica, the practice of yoga has led to a lifelong commitment to health. She learned that through a dedicated practice, she could maintain a more compassionate attitude towards work, food, and the everyday stresses of life, significantly reducing the symptoms of an autoimmune disease she struggled with for many years. Since completing her 200 hour teacher training at Inner Power Yoga in 2013, Monica has led classes in a variety of locations (from the beaches of Hawaii to conference rooms full of tired colleagues and many places in between) with students of all levels, bearing witness to the truth of the saying “you are SO much stronger than you think you are.” Everyone comes to their mat with a different story, but Monica believes that each and every person can benefit from connecting breath and movement into one fluid practice.

Stepping on the mat is just the beginning! An English major at heart, Monica is almost guaranteed to be found behind the pages of a book (or two or three) anytime she’s not on her mat. Either that or she’s making a mess in the kitchen. There’s also a good chance she’s dancing somewhere righ now.

I came to yoga as a way of life rather late in life. I began a Bikram practice nine years ago and there was something about the moving into stillness that got to me. About three and a half years ago i went to my first vinyasa class and that was it; i was in my teacher training with Rolf Gates within four months. As i retired from 16 years of training race horses, I began my journey as a yoga practitioner and teacher. I love the freedom and the empowering nature of a vinyasa practice and added with daily meditation, there has been a growing joy, peace, and understanding in my life.

Azi is the founder of Easy Day Yoga & Meditation. Azi's desire to help people heal and realize their self-worth is deeply rooted in her childhood. As a child, she dreamt of having a place of healing where she could host people and share her many blessings with them. Later in life, she discovered an ancient teaching which allowed her to connect with her childhood calling. Everything came to fruition after she completed a 10-day silent Vipassana meditation. She decided to leave her high stress career and to dedicate her life to the path of yoga and meditation. Azi's vision for Easy Day Yoga was drawn from her professional background in Psychology, French, and Persian literature.
It's her belief that one is a yogi not just on the mat, but that mindful practice of yoga must be integrated off the mat and into our daily lives.

I was first exposed to yoga in 1995 in my native home of Iran. I moved to the United States in 2001 where I continued my devotion to yoga – focusing specifically on the Hatha and Kundalini practice. As my life in the United States continued, I went through many personal and professional highs and lows. Disappointment, heartbreak, mistakes (some in my control, some not) – I went through it all. In attempt to cope and broaden my horizons, I fell in love with travel. I was fortunate enough to travel extensively throughout Asia. I experienced the many beautiful, historic and ancient cultures with deep history in healing and spirituality. While my travels in Asia were beyond anything I could have imagined, I still had a void. In 2012, I felt at a loss again - still separated from my inner light and still feeling without peace. I then decided to rededicate myself to my practice. This time I stepped in to the hot room of Power Yoga. I knew immediately this time was different. As a person, I had evolved and this practice brought something different out of me. The loss I felt internally was slowly starting to heal. The connection I felt with my practice was beyond words. After several months, I was encouraged to begin training to become a yoga instructor. My teacher at the time saw something in me that I didn’t even see in myself. I trusted her. I trusted my journey. And I felt this is where life’s highs and lows had led me – and I was going to embrace it with open arms. My yoga and my jewelry designs are intertwined and become one in my spirit. I’m thankful to have the opportunity to share my creations with the world. You can read more about mojee by visiting www.mojeeyatra.com