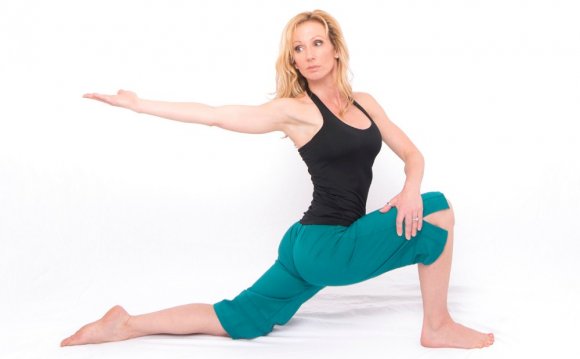 Kathy Graham, an OESHer and a registered yoga alliance teacher, will be bringing her second yoga class up from Bedford, Virginia to our factory in Charlottesville this week. Like her previous class of students, they’ll get to see our yoga-friendly, green, sustainable shoe manufacturing process that we use to make OESH shoes.

My interest in yoga began back when I published a research study demonstrating a link between reduced hip flexibility and declining walking performance in healthy elderly subjects. With the rather non-sexy title, “Biomechanical gait alterations independent of speed in the healthy elderly: evidence for specific limiting impairments, ” it didn’t engender a whole lot of excitement beyond my fellow biomechanical and human movement researcher colleagues. Besides, that research was overshadowed by another study we published that year with a much sexier title, “Knee osteoarthritis and high heeled shoes” that received huge attention in the press and ultimately became the genesis for creating OESH. Our hip flexibility research did though grab the attention of a couple non-medical friends who were practicing yoga. This was 1998. Not a lot of people were practicing yoga back then.

Of all the hundreds of parameters we were measuring with 3D motion analysis and force plates, peak hip extension during walking was the most impaired parameter. The medical-scientific community was keen on our findings. Numerous stretching and strengthening exercises were being recommended but very few, if any, had ever been scientifically evaluated. The idea of testing an isolated exercise program that specifically stretched the hip into extension was appealing and I was awarded a multi-million dollar grant from the National Institutes of Health to study hip extension exercises.

I learned that yoga was the surest way to improve hip extension flexibility. In our randomized clinical controlled trials of hip extension stretching, we had to use a somewhat sterilized means to stretch the hip into extension. Simultaneously, we investigated how different types of yoga and yoga poses can affect hip extension. In 2005 we published what was one of the first scientific studies of the biomechanical effects of yoga. It was a preliminary study, but it showed that a gentle Iyengar yoga program improved peak hip extension and general walking performance.

Our research and my subsequent serving on a grants review committee for the National Institutes of Health, helped encourage further research studies by others. We were recommending for funding by the National Institutes of Health studies on yoga just about every granting cycle. According to this publication here in 2014, there has been a surge in published scientific studies supporting yoga since 2007. From 2011 until 2014, more than 200 scientific papers with the word “yoga” in the title were published each year.

My personal experience with yoga

I’ve been practicing different types of yoga, on and off, for the past decade. With more research suggesting that trunk and hip extensor strength is also important to maintaining optimal gait function, I have morphed the hip extension stretch into what I call my “Two-Minute Yoga Routine.” Admittedly, I don’t always find time to get to a yoga class. Even so, I try to incorporate a few yoga poses into my factory routine.

The effect of footwear