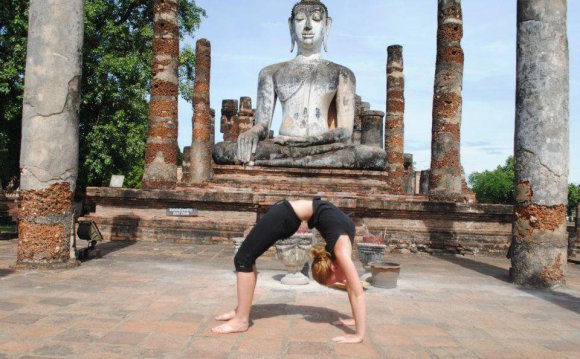 Doing the mountain pose may transport you into a world of zen, but for 34 year-old Njuguna, yoga is everything. The exercise helped him escape a downward spiral of drug abuse within Nairobi's slums.

"To me, yoga is not a religion, " he says, "it's how you trust, how you believe, because it has transformed my life and it has made me take full control of my life".

Njuguna grew up in a poor community and fell into the wrong crowd while in high school. Most in his group of young thrill seekers had dropped out of school.

"All my friends were criminals and thieves", says Njuguna. Each day turned into the next, "but when you are into drugs you feel the day is shorter", he adds.

Yoga is now spreading across Kenya. Elenson's project started in 2007, and currently has more than 6, 000 converts. From Maasai warriors to Kibera slum dwellers, downward dog poses are being embraced by new recruits - more than 300 community classes a week are given by the project across 80 locations in Kenya.

Now married, Njuguna is a yoga instructor within the organization. He runs classes every Friday within Kangemi slum. As he contorts his body fantastically into bird of paradise - a move definitely not for beginners - yoga is a practice that empowers he insists, "when you breathe, you let go the tensions around your body, you let go the fears."

The transformation has made Njuguna determined to give back to his community through yoga: "I have lost a lot of my friends, " he says, but by teaching yoga he hopes to inspire others.