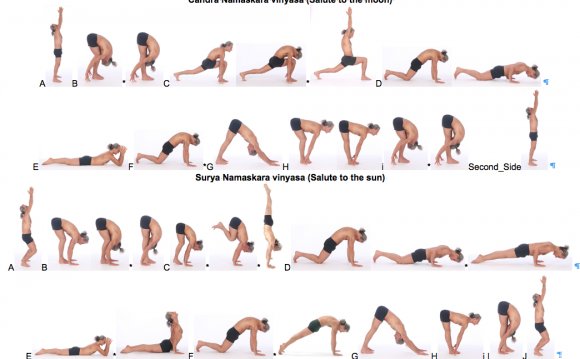 The practice of Moon Salutation (Chandra Namaskar) is a reflection of Surya Namaskar (Sun Salutation), just as the moon has no light of its own but reflects the light of the sun. The sequence of asanas is the same as Surya Namaskar except that Ardha Chandrasana is performed after Ashwa Sanchalanasana. Chandra Namaskar is best practiced at night, especially when the moon is visible. While practicing at night, ensure that the stomach is empty.

Chandra Namaskar helps you in channelizing the lunar energy; which has cool, relaxing, and creative qualities. Chandra Namaskar also stretches the spine, hamstrings, and backs of legs; strengthens leg, arm, back, and stomach muscles.

Like all other yoga practices, it is important that you learn Chandra Namaskar under proper supervision and guidance.

Stand straight with feet together. Bring the palms together in the prayer position.

Breathing in, bring the arms forward and up, stretching as high as possible. Gently arch the back by pushing the arms back and the pelvis out in front. The elbows and knees are straight, and the head is in between the arms, chin pointing to the ceiling.

Push the right leg as far back as possible; right knee on the floor, sole facing the ceiling. Look up.

Holding the breath, push the left leg back. Bring the body into a straight line while keeping the knees straight.

Breathe out and pull back. Take the hips to heels, forehead towards the knees and hands firmly on the ground in front. Stretch.

Move forwards, keeping the chin close to the ground. Your chin, chest, palms of your hand (on either side of the chest), knees, and toes touch the floor. Raise your posterior.

Breathing in, go into the Cobra position. Hands under the shoulders, elbows close to the body, heels together. Press the pelvis to the ground and lift up. Focus on the bending in the upper back.

Breathing out, come up on hands and feet in an inverted ‘V’ position. Push back with arms and hips; try to get heels on the ground.

Breathing in, bring the right foot forward. Looking up, keep left knee on the ground and left foot facing the ceiling.

Breathing out, bring the left foot alongside the right.

Breathing in, come up to standing position, stretching the arms straight up and back, push the pelvis out to the front.

Breathe out and bring the arms back down to the sides. Feel the difference between the two sides of the body.