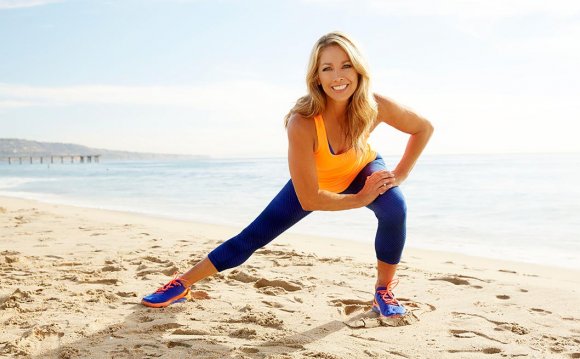 “Owning something from here might be inspirational. There’s inner energy, ” says O’Donnell, a professional organizer who is part of an early cluster of shoppers to scout the room on the first morning of the estate sale.

As for those shoes, Austin boasts she once moved 90, 000 in a single day on QVC (“that was in 19. . . I don’t even know, ” she says), but they’re a tougher sell now. Instead O’Donnell wanders over to a brightly hued stack of stretchy pants and tanks — several still with their tags on — and immediately grabs an armful.

Austin has always been on top of the trends, shepherding fans from step aerobics to high intensity interval training. So it’s no surprise that she and her husband, Jeff — a lawyer/sports agent — are embracing the latest baby boomer rite of passage: downsizing.

Minus the personal effects, such as family photos and mementos from two terms served on what is now called the President’s Council on Physical Fitness, Sports and Nutrition, everything inside the brick colonial is up for grabs. That includes pots, paintings, pillows and even a pair of painted greyhound jardinières that guarded her front door for 15 years.

“This has been a great place to raise kids, but it’s too much house to deal with, ” Austin says, taking a break from sorting her stuff prior to the sale. Their two daughters are in college in Los Angeles, so the couple bought a spot on Manhattan Beach, where they’re spending half of their time. And they’re trading their sprawling suburban home for a compact condominium overlooking the water in Old Town.

It’s been painful to part with so much of her past, Austin says — particularly that morning, when she’d bonked the bridge of her nose while moving a box. But there’s simply no room for most of her furniture in her new place. And proceeds from the sale will cover medical bills for Austin’s niece, who’s battling breast cancer.

In her office, she points to the pale wooden desk where she wrote 10 books and planned out nearly 50 fitness DVDs (she released her three newest titles last week). There was always a set of five-pound weights to one side, she says, because “if you see them, you use them.” She’d pump out bicep curls and one-arm rows while chatting on the phone.

Now, the workspace has been cleared of everything except a wooden figurine of an older lady goofily thrusting a pair of dumbbells in the air. (Price? $25.) “Someone gave it to me as a joke. But my husband — it creeped him out, ” Austin says.

She rushes down the hall to the connected family room and kitchen, which is lined with mugs, dishes and serving bowls all ready for the sale. Austin stands over the countertop, miming how she’d chop vegetables to make dinner or shoot segments of her Lifetime show. From that spot, there’s a panoramic view of the backyard pool and tennis court.

But the feature of the house she’s going to miss the most? “My gym, ” says Austin, who stocked it with everything she could possibly need for any kind of workout.

Other people own exercise equipment and gear, but only a select few have this extensive of a collection, says Elizabeth Wainstein, owner of the Potomack Company, which is overseeing the estate sale and auction. The unusual assortment influenced her decision to rely on the combination method — some items are tagged so people can buy them on the spot, but other items are reserved for online bidding.