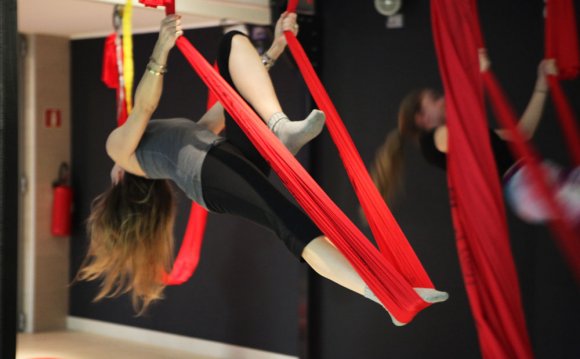 When most people think of yoga, they think of yogis on sticky mats practicing poses while grounded firmly on the studio floor. What they don’t think of is a type of yoga that has traded mats for AntiGravity hammocks, in which students spend most of the class suspended several inches from the floor. But that is exactly what one will find in Charlottesville’s new aerial fitness studio called DreamFlight Virginia. WMRA’s Kara Lofton reports.

LAINIE GRATZ: Different yoga techniques with dance, calisthenics, Pilates – so it’s so many different things, it’s actually become kind of its new form of fitness in that sense.

That was Lainie Gratz, owner of DreamFlight Virginia. Several years ago, Gratz injured her back while practicing Martial Arts. She was able to manage her pain through floor yoga, but was never quite able to get into the inversions (such as headstands) that can really help with spinal decompression. Then she tried aerial fitness.

GRATZ: Pretty quickly, within a few classes, I was able to turn around that momentum of pain that was chronic, really for years. And so really lengthening the spine alignment is huge.

While aerial fitness does require some core strength, Gratz said it is an exercise that is accessible to anyone because the hammock acts a support and stabilizer for traditional yoga postures such as the Warrior Series, Downward Facing Dog, and Mountain Pose.

MORINA LAMB: It has been amazing. I at first was ‘uh oh we are going to be going upside down and swinging around in a hammock’ but it is just the most enlightening, the most soothing, the most I’ve ever stretched and my body was able to do things I haven’t been able to do in quite a while.

That’s student Morina Lamb, who is 55 and is a regular practitioner of Bikram yoga. She said as she gets older, she keeps looking for different activities that don’t aggravate her arthritis.

GRATZ: There’s the whole concept and importance of mindfulness in this practice, really learning to come to presence, while you are working on each pose and learning how to take that with you outside of class as well. It’s just super versatile and fun, I mean it’s just completely fun.