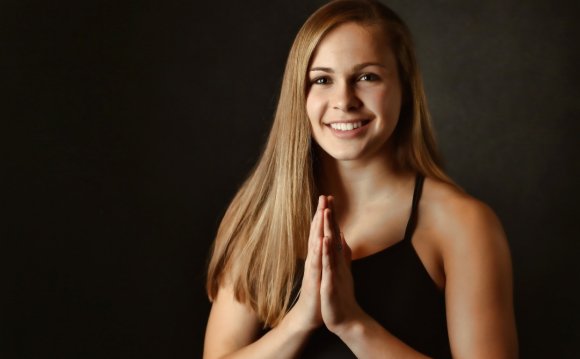 However, in the last 10 years or so, adults’ participation in yoga has nearly doubled across the United States. In 2012, the National Center for Complementary and Integrative Health reported 9.5 percent of adults practiced yoga, an increase of 5.1 percent from 2002 when the study began. That’s more than 21 million people, and growing.

For those not participating in the trend, yoga is a system of exercise, breathing, and meditation, as explained on the AYA website.

Yogis (practitioners of yoga) emphasize however, yoga is not all about stretching and flexibility. For the Center for the Advancement of Well-Being at George Mason University for example, it is a holistic exercise in mindfulness and awareness.

“The idea is that people are so busy and there’s very little time to pause and calm down and really allow yourself to settle in; offering people yoga on campus really gives people that hour or 45 minutes to do just that, ” Brandice Valentino, Director of Well-Being programs at the Center, said. “It benefits students; it benefits staff and faculty in the sense that they can go back to their job with a little bit more equanimity, a little more presence, a little more clear headedness.”

She explained yoga teaches psychological flexibility. It is about being able to understand aspects of oneself like energy level and how that affects the mind.

“When you feel like you are drawing everything into the midline of your body, your mind also gets that experience, ” Valentino said. “So it goes from being scattered all out here, to having the experience of containment, or alignment, or presence. It’s this great exploration of the mind-body connection.”

Beyond these mental benefits, the physicality of yoga is not one founded in comparison or competition. It is not about what other people can do, it is about being aware of one’s body and what one can do that day. There is no need to look outside of oneself for validation.

“There are people, who come to the yoga classes that I teach that have canes, so they’re practicing with canes. We have people who are in perfect, physical shape and can do crazy poses, ” Suzanne Morgan, a yoga teacher with a 700 hour certification, said. “The job of the teacher is to offer opportunity at each level and make it accessible so that each one has a physical experience and benefit from coming to the class as well as emotional and mental experiences. It really depends on the starting place of the person. One person that might be what they need physically to carry them through. Some people might need more than that.”

She tells her yoga students to try to be “C” students. Not everybody is doing the same exact thing and there is no need to be the best in class.

It is also important to note that Morgan, when teaching at Mason, she teaches other classes in the Northern Va. area as well, the classes are almost always full.

The popularity of yoga may simply be because people are more open to it and are seeing the benefits of the practice.

“I’ve been teaching for over 13 years, I’ve seen a change in that. First off, there’s a lot of scientific based evidence on the benefits of yoga and meditation. So doctors are referring people to yoga classes. We get a lot of support in the health community for yoga, ” Morgan said. “Also, athletes, if you look at any of the top athletes, they are taking yoga classes. People are really seeing the results from it and that just helps to have this awareness of what the benefits are.”

USA TODAY indicated the popularity may be primarily because of the increase in accessibility. Yoga classes are offered in many differing places from gyms to churches.

In Fairfax however, the interest in yoga may go further than this.

John Welborn, the co-founder of Spark Yoga, with studios in Arlington and Fairfax, said, “…We view ourselves as fitting into a broader fitness trend in Northern Virginia. An interesting fact about Fairfax County in particular, that I read recently, is it has the most fitness studios per capita of any county in the country. Which is a striking statistic. People who want to be fit have a lot of choices.”

At Spark Yoga, Welborn talks about the community formed at the studio.

“I think Fairfax County, I wouldn’t call it affluent, it’s sort of middle income area, but I do think its people are well educated, they’re interested in health, they’re interested in fitness, people don’t love the idea of going to the gym anymore. They find they want to have boutique fitness options. … It becomes a part of their identity. Before, giant gyms tended to be the option. It’s not very personal. I’m not criticizing gyms. I think gyms offer a lot of wonderful things for a lot of people, but it is a less custom fitness option. People like customization and they like having the community, ” he said. “Our studio, I’ve found becomes a social circle, it becomes a community. For example, we have this wonderful thing called the mindful reading club. Every month one of the students leads a discussion on a new book. These are people who practice together three or four times a week, they talk about books, they go to training together, it becomes a part of their social identity.”

Dr. Jatin Ambegaonkar, an associate professor and academic program coordinator of the Exercise, Fitness and Health Promotion degree at Mason, echoes this interest in community and socialization in his research in dance medicine and science.

“I think the advantage that dance has, beyond when you talk about exercising in a gym, is the social interaction that you get when you are dancing. In that it is very essential in what makes dance an exercise form that people can continue to perform and adhere to, ” he explained. “The problem with fitness and exercise programs is that people get tired and bored of the routine, so the social interaction that people get when they are dancing is something that keeps them in and with a physical activity that is fun, yet at the same time provides a mind and body connection.”

This reasoning may also explain why those who have started practicing yoga have stuck to it and encourage others to join in. For Spark Yoga, Welborn feels that word of mouth is their most powerful marketing tool.

Ultimately, yoga has the potential to be a lifestyle choice, which may make it easier, or not, for people to adhere to.