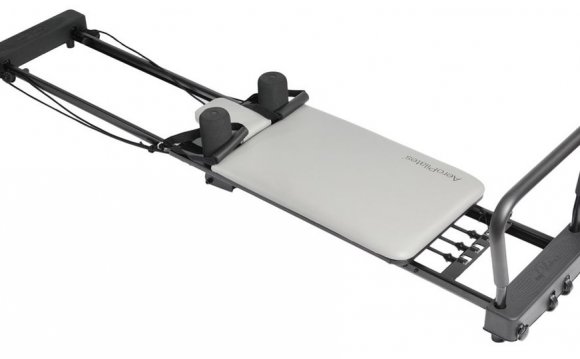 During World War I, the German-born Joseph Pilates was interned on the Isle of Man in the Irish Sea as an enemy alien. The health conditions in the internment camps were not great. Pilates insisted that everyone in his cell block participate in daily exercise routines to help maintain both their physical and mental well-being. However, some of the injured German soldiers were too weak to get out of bed. Not content to leave these men lying idle, Pilates took developed a novel method for physical exercise. He took springs from the beds and attached them to the headboards and footboards of the iron bed frames. He turned the beds into exercise equipment that provided a type of resistance exercise for the bedridden "patients." These mechanized beds were the forerunners of the spring-based exercise machines, such as the Cadillac and the Universal Reformer that Pilates designed after the war for which the Pilates method is known today.

In 1925, Pilates immigrated to the United States. He met his future wife and dedicated teaching partner, Clara, on the boat to New York City. Joseph and Clara opened a studio in New York City and began the work we now find today in Pilates studios around the world. The Pilates method encourages the control use of one’s muscles. Primary attention is focused on one’s core postural muscles that help keep the body balanced and provide support for the spine. Fundamental to the Pilates method is awareness of breath and of alignment of the bones during exercise and during regular activity. This leads to strengthen key muscles throughout the body.

Joseph Pilates died in 1967 at the age of 87 in New York. His method, his apparatus, and his philosophies continue today, throughout the world.

If you are not familiar with the Pilates machines, check out our "Pilates Machines" page where you can see the differnt kinds of exercise machines and a short description of how they are used.