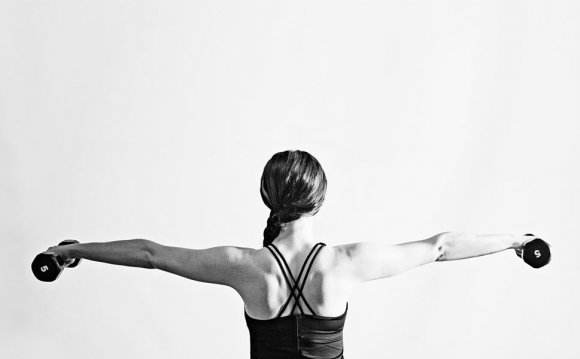 The latest round of “no cheat” fitness trends.

At Spark Yoga studio in Arlington and Fighting Gravity Fitness in Richmond, participants in aerial yoga classes hang suspended in the air in long hammocks that dangle from the ceiling. They bend and stretch the silky, circus-grade aerial performance fabric as they move into downward dog and other traditional yoga poses.

Aerial yoga “is one exercise activity where gravity is actually working for you, ” says Susan Park, who co-owns Spark Yoga with John Welborn, Ph.D. In the classes, which have been offered since the studio opened two years ago, the gravitational pull that results from hanging mid-air “helps lengthen your spine and your muscles and relieves your joints. It’s very therapeutic.”

Aerial yoga is one of the latest examples of bodyweight training, a hot fitness trend that focuses on leveraging gravity to improve strength, flexibility, coordination and balance. Other popular programs that utilize bodyweight include barre-centered classes, Navy SEAL workouts and the use of suspension trainers like TRX.

Also making the most of gravity is the Woodway Curve, a non-motorized treadmill with a curved running surface. But if you try it, you’d better stay focused. While some individuals like to read on treadmills, “The Curve offers a more intense workout that requires greater concentration and balance, ” says Kevin Boyle, director of Explosive Performance, the athlete training division of McLean-based US Fitness, which operates Sport&Health, Crunch and Onelife Fitness gyms in Virginia.

Unlike a motorized treadmill, continuous effort is required to move the belt. According to its manufacturer, the benefits are many: Not only is the Curve eco-friendly, but it can burn up to 30 percent more calories than its motorized counterparts.

“It’s more challenging, more tiring to run on the Curve, ” compared to a regular treadmill, says Boyle. While motorized treadmills are limited in speed, usually to about 10 mph, “The Curve goes as fast as a human being can move, ” allowing athletes like his Washington Redskins clients to train for maximum speed.