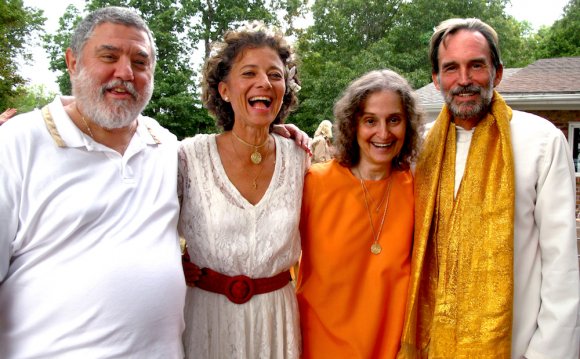 When I tell people I live in a yoga community, their faces brighten.

“You must be really flexible!” they exclaim. “Do you do the kind where you sweat in a really hot room?”

A cloud of confusion drifts across their faces. “Ashram, ” they repeat, rolling the syllables around in their mouths like marbles. “What’s that?”

How can I begin to explain? In the Encyclopedic Dictionary of Yoga, Georg Feuerstein says, “Ashrama is derived from the Sanskrit word shrama meaning ‘effort.’ It refers…to a hermitage where an adept instructs disciples who exert themselves in a sacred way of life.” I tell my new acquaintances that I live in a community dedicated to the teachings of classical yoga, which have been directly transmitted from teacher to student for more than 10, 000 years. But then I have to redefine “yoga.” They’re thinking it means a set of poses, or at best, a meditation practice, while I’m thinking of yoga as a spiritual worldview, a way of life.

The typical ashram routine, I explain, is quiet and simple: you rise before the sun to practice asana, pranayama, and meditation. You eat three light vegetarian meals and spend your days working hard in service of the ashram’s broader vision. You spend your evenings enjoying the outdoors or sitting for satsang, kirtan, or rudra yaga practices. If you’re lucky, you have contact with a spiritual teacher who breaks you out of your limited worldview and expands your horizons.

It’s a far cry from life in the mainstream.

Ashrams began popping up in the United States and Canada in the sixties when a wave of yoga masters came to the West and mentored a generation of soul-searching hippies. These students dismayed their families by rejecting the mainstream approach to life and dedicating their lives to yoga. They moved to ashrams (built them, in many cases) so that they could be near spiritual teachers like Amrit Desai, Swami Muktananda, Swami Kriyananda, Swami Radha, Swami Rama, and Swami Satchidananda.

Spiritual teachers served as loving grandparents who showed them their inner preciousness, their innate potential, and the deeper purpose of life.

These hippies grew up and began having children of their own. In the seventies and eighties, many raised their kids in and around ashrams, offering them a comprehensive experience of yoga that’s almost unimaginable to the Western mind, because it was woven into the very fabric of their lives. Many of these children studied Sanskrit and practiced yoga and meditation in ashram-funded schools. They explored their natural surroundings—woods, lakes, mountains, fields, and creeks—in close-knit communities where everyone looked out for them. They grew up in a culture of wholeness—in a world where meditation was a part of daily life. Spiritual teachers served as loving grandparents who showed them their inner preciousness, their innate potential, and the deeper purpose of life. These kids were so absorbed in the Eastern way of life that when they traveled to India, people spoke to them in Hindi.

Where did these ashram kids go when they grew up? Have they rejected their upbringing or are they still practicing yoga? Recently, I had the opportunity to speak with two women who were raised in and around ashrams—Radha Metro at Swami Satchi-dananda’s ashram in Virginia and Clea McDougall at Swami Radha’s ashram in British Columbia. (Both Swami Satchidananda and Swami Radha were students of Swami Sivananda, a man who profoundly affected the transmission of yoga in the West without ever stepping foot on our shores.) Here are their stories and their thoughts about the future of yoga here in the West.