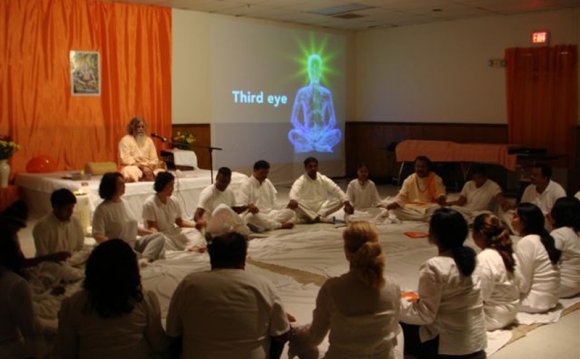 A few years ago, renowned yoga teacher and author Cyndi Lee moved from New York City to Lynchburg, Virginia, where she didn’t know a soul aside from her now husband. “I didn’t have anything in common with anybody, ” she recalls. “I was just a weird yoga alien in the middle of conservative central Virginia.”

The author of Yoga Body, Buddha Mind hung out her shingle. To her delight, “people came out of the woodwork. They were like, ‘Thank you so much. We are so happy [your studio] is here.’” It didn’t take long for committed students to become a family of sorts—the sort that yogis and Buddhists call sangha. “They all love each other now, ” Lee says. “They inspire each other. If somebody feels like they’re going to crap out, the others help them. For some people in places like this, it’s almost a lifeline.”

Sangha is often translated as “spiritual family, ” “spiritual community, ” or “good company.” It’s a group of people trying to live by certain shared principles, striving to become the best version of themselves, and supporting each other in that effort.

For all the millions of people streaming into yoga studios and taking up meditation, sangha is still a relatively unknown concept. But joining one may do you more good than doubling your efforts on the sticky mat or meditation cushion. For one thing, it will fuel your desire to practice. Being part of a group can be a powerful motivator, which is why running clubs are popular among marathoners and why a working mother will drag herself out of bed for 6 a.m. boot camp. But a good sangha does more than motivate. “It supports and nourishes us in times of isolation and fear, ” says New Age chart-topper Deva Premal. Her latest album with her partner Miten is titled Songs for the Sangha, a shout-out to the global fan base they regard as their spiritual family. “Our sangha is very precious to us, ” adds Miten. “It’s highly important to our evolution as a couple, as human beings, and also as musicians.”

Shop for your spiritual tribe

The easiest way to connect with like-minded folk is to join the orbit of a wise teacher. Many of them travel widely and share their teachings through books, videos, podcasts, and tweets. If you catch them in a town near you, you’ll likely encounter kindred spirits. You might learn of local sanghas or even meet a local teacher trained or inspired by the headliner.

But you don’t need to shoot for the stars. Wise teachers with little name recognition are all around us. To find one, “you go shopping, ” Lee advises. Try different classes in different places, ask your favorite teachers about their favorite teachers, and trust your instincts. “What do you feel like going back to again? What’s feeding you?”

While a good teacher is invaluable, sangha can flourish without one. All you need is two or more people who share a spiritual practice or an interest in personal growth. What you do when you come together is up to you. Here are a few ideas.

Whether searching for an existing sangha or building one from scratch, don’t shy away from diversity. The wider the range of human experience in your spiritual family, the greater your opportunity to practice empathy and compassion. There’s even something to be gained from personality clashes. “Part of what sangha does is give you opportunities to be irritated, and work with your mind, ” says Lee. “It’s not always a lovefest."