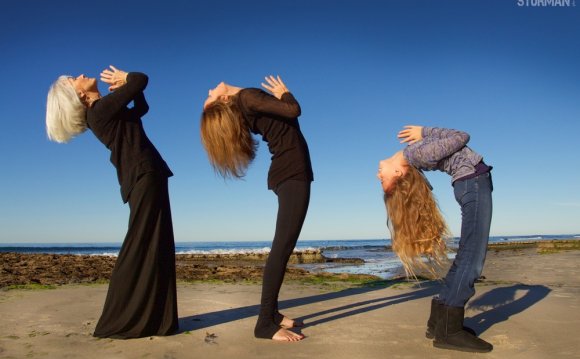 The author planned a trip to mark her daughter’s last year at home—“the purgatory between childhood and adulthood, parenthood and the unknown.” Photograph by James Kegley

In yoga, the route to self-understanding is in the breath. “Inhale, ” yoga teachers instruct. “Exhale.” My 17-year-old daughter and I arrive at Satchidananda Ashram—known as Yogaville—on an August afternoon almost too hot to breathe. I’ve brought Ralli to mark the beginning of her last year at home before college.

At the yoga retreat there are 18 of us, Washingtonians ranging in age from 17 to 60, plus our instructor, Gopi Kinnicutt. We’re staying at the remote Yogaville for six days. The ashram is home to a hundred or so souls living and working on 700 acres in Virginia’s Buckingham County, 40 miles south of Charlottesville. Before he died, founder Sri Swami Satchidananda traveled the world lecturing. He told his listeners, “If you want to see a heaven, come to Yogaville.” I’m touched by the “a” that he put before “heaven.” Finding our personal piece of heaven seems like a proper goal for our mother/daughter trip.

I’ve defined the retreat to Ralli as a chance to be together. We still share a house but seldom the same state of mind. The drive to Ralli’s school is like sitting in a recording studio on the opposite side of the glass from the musicians. I’m no longer part of the action. Ralli tunes the radio to Top 40, plays pizzicato on her cell phone, bows her lashes with a mascara wand. I discuss dinner and homework and flinch when Ralli swats me aside. She and I have entered that realm of purgatory between childhood and adulthood, parenthood and the unknown. We haven’t said the last rites for her childhood, but we’re nervously fingering the bedspread, listening for its final breath.

The word “yoga” is derived from the Sanskrit for “yoke” or “union.” The discipline is made up of a system of postures called asanas. I’ve found that, when combined with conscious inhalation and exhalation, yoga allows me to step into myself and put my buzzing thoughts on pause. I came to my yoga studio in DC’s Cleveland Park hobbled by back pain from 20 years of running but stayed for the sweat and friendship. Yoga is a low-calorie alternative to Cheers—an Om Bar where everybody knows your name. It’s a physical and mental discipline—the exhale of self-doubt, the inhale of forgiveness.

Yoga is the “union of our will with the will of God, ” writes B.K.S. Iyengar in Light on Yoga. My friend John, a Catholic professor of religion, teases me about practicing “latte lite” religion. He tells me the ancient Indian religious practice of yoga has been transformed by yuppies into a combination spiritual fad/high-end aerobic workout.

“I wish you would go to India and sit with Hindu yoga masters who approach the practice of yoga in a traditional manner, ” John says. “You hunger for something more genuine, I suspect.” He tells me I must choose my path: “Otherwise, you’ll go from one craze to the next. As Kierkegaard put it, either/or is the way to heaven, both/and the way to hell.”

I tell him I don’t believe I’m on a spiritual journey. In yoga as in jogging, the union of breath and movement simply feels good: lifting arms overhead on the inhale, exhaling into a forward bend. Yoga reminds me of connection with my children, the ebb and flow of our days together, the bond of our blood and lives.

Much of my life with my kids has taken place inside cars. When Ralli was barely five, she and her older brother and I converted to Judaism, my now ex-husband’s faith. Ralli and I learned to read Hebrew. I taped index cards with Hebrew letters around the house, naming the door, the mirror, her bed. She liked me to sing the Sh’ma to her in the car, a passage from the Torah that translates as “Hear, O Israel: The Lord is God, the Lord is One.”