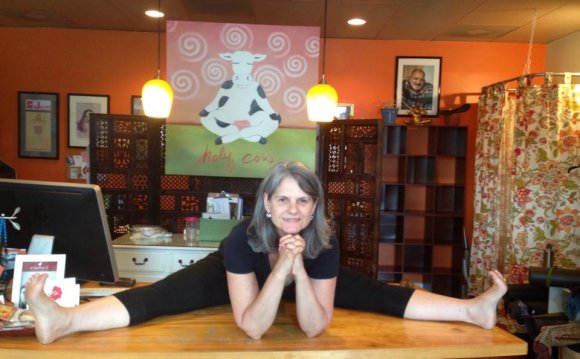 When I began taking yoga classes in 1989, I was looking for an exercise class which engaged my mind as well as my body. I was a computer programmer, and I needed a way to take my mind off of my program when I left work. At that time, yoga was viewed as being a little odd, possibly cultish, but I thought it was fun, and I always came home feeling good.

I took my first class at The Health Advantage Yoga Center (HAYC) in 1994. Betsey Downing, Ph.D., the founder of HAYC, had begun teaching classes at Brown’s Chapel in Reston several years before. As her classes grew, she moved to our space in what is now half of the Purple Room. By 1994, the studio had grown to two yoga rooms and a meditation room, covering the area from the current Purple Room to half of the Green Room.

My first class at HAYC changed my view of yoga. The previous classes I had taken were mixed-level and not alignment-based, so the classes were either too easy or too challenging, and there were no consistent explanations for positioning various body parts. Often the level of difficulty changed drastically from week to week, and the instructions in one class would completely contradict the instructions of the class the week before.

In my first class with Betsey, she said, “Turn your left foot in to protect your knee.” A simple instruction, but for me, it was a lightbulb moment. There was a reason for each action! As I took more classes at HAYC, I saw that instead of just coming to class and moving, we were being taught. The instruction and poses fit the level of the class, and by the end of each session, I understood more than I had at the beginning.

I continued to take classes at HAYC and after a particularly difficult computer project during which I worked over 96 hours a week for several months, I recognized that though I enjoyed programming, this was not how I wanted to live my life. I switched to another programming job with more manageable hours, started practicing yoga at home, and began to look at other career options. I soon realized that yoga was what I truly enjoyed, so I took the HAYC Teacher Training Program and began teaching at HAYC in 1997.

Over the next few years, classes continued to grow, and Betsey expanded into the Blue Room. In 1999, Betsey moved to Florida. She opened another studio there and continued to run HAYC, coming back for a weekend or week each month to manage the studio and lead the teacher training program. I approached her about buying the studio in the summer of 2000, and we completed the sale in January 2001.

I had no idea what I was getting into, and I was very fortunate that Liz Wright, Betsey’s office manager, stayed on and remains our office manager. I was also fortunate that the teachers stayed, several of whom still teach at HAYC fifteen years later: Kelly Cleveland, Doug Keller, Kelly Kessler, Janet Kim, and Pat Pao. There are also a number of students who started taking classes with Betsey at Brown’s Chapel who continue to take classes with us today.

Our classes continued to grow, and in 2006 we expanded to fill the entire top floor of our building. Since then, we have weathered the recession and changed a Virginia law which would have made yoga teacher trainings too costly to hold.

In the 27 years that I have practiced yoga, the perception of it has changed. When I bought the studio in 2001, the view was starting to shift from offbeat to mainstream: yoga instructors began to appear on segments on TV morning shows and talk shows, and reputable magazines like Time published articles praising the benefits of yoga. Over the next few years, gyms and recreation centers went from holding a yoga class or two a week to scheduling several a day, yoga pants became popular, and stores and websites dedicated to selling yoga clothing emerged. Now there are yoga studios and classes everywhere, and new types of yoga arise as people blend different styles of yoga or add yoga to other exercise forms.

Over the years, I have changed too. Though I am still type A, I am more balanced and less stressed with yoga and meditation as part of my daily routine. Each week I look forward to going to the studio and to my classes. I have been and remain grateful to everyone connected to HAYC: the students, the teachers, and the staff. I have met so many interesting people and watched friendships form and grow. Thank you to everyone for making HAYC what it is today. HAYC has become a true community, and I cannot imagine what my life would have been without you.

When I was in college, courses were divided into three areas of study: