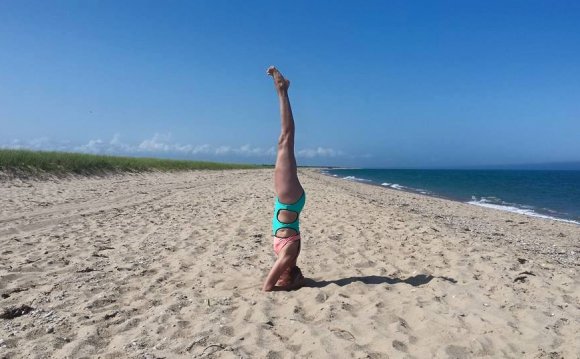 Actually this place is called St. Paul Hot Yoga and Health now. I went today and I really like it. My friend recommended it. I have taken part of a Yoga class at LA Fitness but never hot yoga. I was pouring sweat when I left. I am definitely looking forward to my next class. Not only did I not feel out of place since i was brand spanking new but I felt very welcomed. The instructor was very nice. The people i was taking the class with was nice. It's not just a class but it is also a friendly supportive community. If you're interested in trying something new, sign up for a class. The hot room really helps you if you're looking for a way to escape the cold for a moment. Recommended to drink a lot of water, when I say a lot I mean a ton.

I love bikram hot yoga. I am a fan of Kaitlyn's hot yoga flow class. I have been to the studio for less than a month and I have learned so much. This is what I have benefited from this wonderful place. Firstly, I was very sick during Thanksgiving. I developed a very harsh cough that it sprained by back, no joke. So instead of going to a chiropractor, I pressed in and when to the hot yoga class. It wasn't easy with a sprained back but my continuous class was so beneficial it relaxed my muscles and healed my back. Today I am pain free. Hot yoga is really healing. It's a very good class for an athlete. It's a mind over body discipline. Secondly, I have been practicing yoga for a long time. I am a fan of hot yoga. But I could never be comfortable with the crow pose until I came to this yoga studio. One small tip from the teacher made a universe of difference. All she said was put your gaze in front...now I could do the crow pose. Before I keep gazing at my feet thinking that works and no one studio ever corrected me or gave me this one tip! It's crazy how one small tip makes a difference. I am eager to learn more from this studio. Next my goal is to straighten my legs. I have very tight hamstring. We shall see how my practice goes. I am excited for my journey through continuous healing and healthy living.

This place is absolutely wonderful! The studio is clean and lacks the mildew smell that I've experienced at some other bikram studios. There are also clean showers here too that you can use after your sweat sesh. All of the instructors who I've had class with are really good, and they all make the effort to learn your name the first time! I wish I were staying in the area, as I would love to become a regular, but sadly will be moving out of state soon!

I was unsure of what to expect having practiced at Bikram Yoga Elk Grove in CA since 2008, visiting many other BIkram studios Pittsburgh, Salt Lake City, Sioux Falls, and Yogafresh in Woodbury. After being away from my bikram practice, I was definitely missing the disciplined open-eyed practice while other classes with closed-eyes and non-repetitve postures had me feeling a bit dizzy and outside my comfort zone. As for the studio, the pluses are: -Megan, the instructor was early to the studio, which meant that I could have gone in earlier than 30 minutes, but decided to enjoy the view of the sun and falling leaves from the trees this fall morning. -Studio floors were wooden -thank goodness there was no carpet as in previous reviews that harbors yogi sweat-funk. This as well as other studios' floor may encourage me to get a thicker yoga mat. -Studio has frosted windows -love the sunshine that glares into the studio. For some reason, I seem to be a yogi that seeks a spot window-side. -Studio is lined with mirrors allowing you to solely focus on your and your own practice. -Showers -since I was in the BFs car, I knew that after practice and quick freshen up was surely needed. Post-class/shower, a felllow yogi turned on the fan in the women's changing room, which was much needed after such a great schwetty class. -On the exit, Megan, was a delight to exchange a few words about practice and the wonders that it does off the mat. I thanked her for whooping my arse.

This place is great. Traditional and HOT. The instructors are supportive and demanding-two things I admire!

I just started going here, and I really like it! Apart from the style, which is more about personal preference, the instructors are really nice and supportive. They offer great verbal adjustments, and are really on top of it. You can tell everyone (students and instructors) are really passionate about what they do. They mostly follow the script, but each instructor adds their own personal flair, which is really nice. I recommend checking it out. The students also seem nice, but maybe slightly less chatty/friendly than other studios. But, it might be because it is sort of an intense practice...