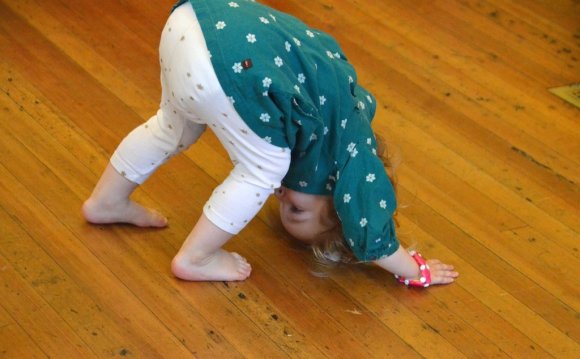 As a former yoga teacher, I used to consider Anatomy of Hatha Yoga my bedside manual. Years later, after my life priorities changed and the focus on physical stamina became less important than attaining a peaceful mind, I revisited the practice. It was a different yoga in my forties than in my twenties and thirties, despite that the poses and concepts were the same.

This reminded me that the quintessence of yoga includes many things — among them, intentional focus, honoring the body, cultivating patience, and the acceptance of personal responsibility. And it showed me that yoga is malleable and flexible — that there are forms appropriate for people of all levels, ages, and stages.

In the early 2000s, I taught a weekly Yoga for Kids course in Arlington, Virginia. The children in the class were energetic, outgoing, and eager to contort themselves into animal poses (with animal sounds, of course). The most challenging part of each session was getting the little students to appreciate savasana (final relaxation), or, as we called it then, “the silent game.”

At the end of each class parents would approach me and ask for tips on how they might encourage their child to practice more silence at home. My standard response was a suggestion that they practice the asana series with their child. As much as I would have liked to take credit for the well-mannered and relaxed children at the end of class, it wasn’t mine to claim. It was the essence of yoga itself and a testament to how it can be adapted to fit different people.

The opportunity to read Louise Goldberg’s Yoga Therapy for Children with Autism and Special Needs introduced me to yet another layer of the millennia-old practice. Goldberg shows that children, autistic or not, can be taught to focus, breathe, and relax with regular yoga practice.

There are far too few books about using yoga as a means to interact with the special needs child. Sonia Sumar’s Yoga for the Special Child: A Therapeutic Approach for Infants and Children with Down Syndrome, Cerebral Palsy, Autism Spectrum Disorders and Learning Disabilities is perhaps one of the most well-known. The crux of Sumar’s book, though, is the parent-child bond that can develop through yoga practice. Goldberg takes the topic to another level by offering yoga as a tool for educators, school counselors, and others.

Goldberg’s approach, is should be noted, is not a variation of play therapy. While play therapy uses a systematic approach to help clients resolve psychosocial issues, yoga therapy centers on the use of movement as a means to quiet the mind. Certainly, though, the two could be used in tandem.

“Yoga therapy affords children an opportunity to play and learn in an environment that embraces their uniqueness and supports their strengths, ” Goldberg writes. “To develop a therapeutic plan that addresses the diverse qualities of each child, it’s useful to have a greater understanding of his or her condition.”

The focus on mental calmness, says Goldberg, opens a world of opportunities for the child with physical or developmental disabilities. The idea behind the practice is to help the child realize a strength he had not previously known. “Yoga therapy is not dependent on language skills or cognitive abilities, ” she explains. “… It is a therapy that meets children wherever they are.”

Goldberg offers suggestions on how to engage children with Down Syndrome, Autism Spectrum Disorder, Emotional Behavioral Disorder, Attention Deficit Hyperactivity Disorder, and more. Perhaps one of the most fundamental aspects of this therapy is to keep the practice positive. In the last part of the book, Goldberg catalogs the postures and provides examples on how to introduce them to children with varied needs.

is a beautifully rendered and thoughtful book that thoroughly covers the fundamental elements of introducing yoga to children. While the goal of the text is to work with children with special needs, Goldberg has written a reference that can be used in many other areas as well. She addresses the neurology, physiology, process, and application of the technique, all of which apply to a wider audience. This is a book that can serve parents, students, instructors, and, certainly, therapists.