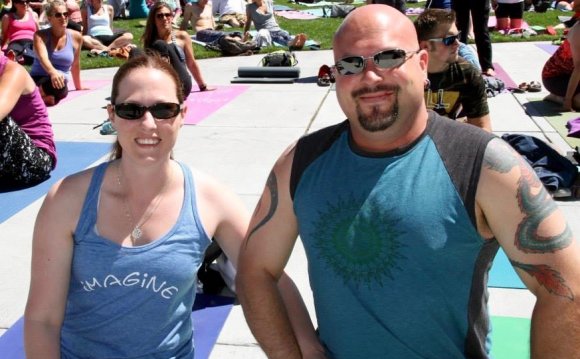 According to a May article in U.S. News & World Report, about 18 million Americans now practice yoga. The average practitioner’s yearly expenditure on all things yoga-instruction, mats, props, clothing, weekend workshops, books, CDs, videos-could be conservatively estimated at a ballpark $1, 500. That amount times 18 million equals $27 billion. To put this into perspective, if the yoga business were consolidated, the resulting corporation (Yoga-Mart?) would be slightly larger than Dow Chemical, slightly smaller than Microsoft.

And it’s getting bigger. Mainstream retailers like J.Crew and Puma have been selling their own lines of yoga gear for some time now, and Nike is introducing its first yoga shoe (the Kyoto, $55 retail) in November.

Some people, granted, not many, are getting rich off yoga. One executive, whose company is one of the largest sellers of yoga paraphernalia, makes a quarter-million a year in salary. That’s in addition to this manager’s stock options, which over the last several years have totaled $1.4 million. When asked to comment on such good fortune, this executive responded testily, “To take this [discussion] into my salary is to trivialize what we do here. I feel compromised by your asking me that question. People are expected to make a living. And besides, you have no clue what I do with my worldly goods-what, for instance, I give to charity. I’m very upset with you.”

A touch of soul-scraping ambivalence? If so, our executive is far from alone. Throughout the yoga community, people are wondering whether the bustling business of yoga is good karma. Is it OK to make big money off a practice that has its roots in renunciation and asceticism? Is the commercialization of yoga distorting its very essence? And what’s next for the yoga biz, now that we’ve already seen the marketing of yogatards, yoga shoes, yogi pillows (stuffed with buckwheat hulls), the $1, 200 “Tantric Bedroom Set” (for adults only), and a battery-operated, inflatable “Chi Machine”?

Where Dollars Meet Divinity
Yoga isn’t the only spiritual practice to be subject to commercializationfar from it. Just name a church, any church, and there’s a store that goes with it. Christianity is huge business, from the selling of Christmas spirit and the $1.8 billion Bible and book trade to the thriving market for Christian pop music and religious gifts. Apparel is the latest wrinkle in New Testament merchandising, with the recent advent of companies such as God’s Gear Gospel Wear, Living Epistles and Exodus. In a 2001 survey done by the Christian Booksellers Association, 34 percent of adults said they had shopped in a store that specializes in Christian products in the past six months.

Surfing the Web, you can buy a gentleman’s 14-karat Star of David ring for $1, 100 at or a stuffed Torah for the kids at Looking for a Koran baseball cap, jersey, coffee mug, or perhaps a nice tote bag? Check out If you’re into Transcendental Meditation (TM), buy TM-approved beverages, herbal supplements, books, and CDs at Even eBay has opened itself to the spiritual marketplace. One man from Des Moines, Iowa, recently offered his soul for sale. The bidding rose from $1 to $400 before eBay pulled the item.