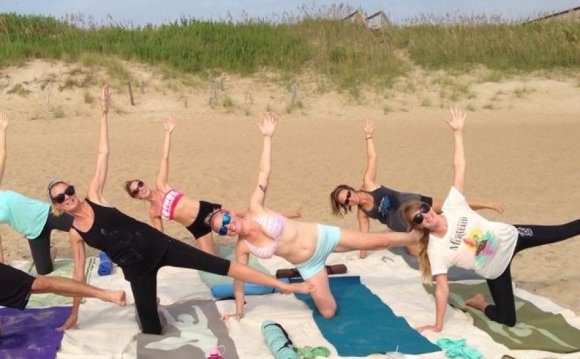 You may have seen them saluting the sun in Stockley Gardens, or posing like warriors at the Pagoda.

They have taken over the first floor of Slover Library with their downward-facing dogs. Dozens and dozens of yogis glowed with prana on the Virginia Opera lawn at the NEON Festival last fall.

They are the Bhav Brigade. Armed with yoga mats and a flow, they’re not trying to sell Norfolk anything but a better relationship with its soul.

“When I think about soul, I think about the essence of a person’s being, ” said Megan Kresse of the Brigade, which provides donation-based yoga classes to the Norfolk community. “What better way to cultivate your being than just be?”

As the endless social media monsoon drenches our minds with feedback and information in a way I don’t think our brains were necessarily constructed to handle, never before has just being been so important.

“For me, yoga has been pivotal in trusting the process and not needing to have control of everything in life, ” Kresse said. “To let go, trust that it will all fall into place as it should.”

The Brigade recently celebrated its first anniversary. Members estimate they have put on about 100 free classes in that time, an incredible amount of output and direct action for a new organization.

One of the founders is Danielle Stern, an associate professor in communications at Christopher Newport University. She was inspired by wanting to lower the barriers to entry into yoga for people, a practice that can serve a much greater purpose.

“I see it as being about personal peace, ” she said. “Individual peace can be disruptive to hierarchical structures.”

In an era of Bernie Sanders and Donald Trump, we talk somewhat flippantly about revolution, when the truth is the revolutions we really need come from within.

“We expect too much of new buildings, ” said the iconic urban activist Jane Jacobs, “and too little of ourselves.”

I chose to write about Bhav Brigade because – spoiler alert – I do believe yoga is central to the cultural evolution our society so desperately needs. But also because, here in Norfolk and throughout Virginia, we have very serious physical and mental health problems.

Cardiovascular disease still kills more Americans than anything else; it’s not the terrorists that are going to get us – it’s our own hearts.

According to a 2013 report from Virginia’s chief medical examiner, it is three times more likely that you will kill yourself than it is you will be murdered; the killer is not in the shadows, my friends – he hides within us all.