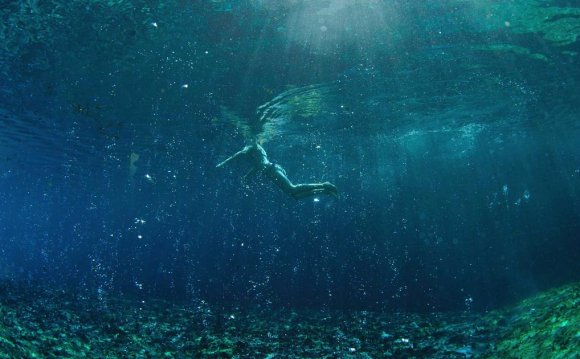 In unison, eight bodies twisted and dropped into a pigeon pose. "Well done, Darla, " breathed instructor Becky Waters as she led a "Yoga Warriors" class at the Garden of Zen studio in Yorktown. "I'm so proud of you."

When Darla Krupski, a commander in the Navy Reserves, formerly on active duty, took the first class in December, she used a cane to walk.

"There's no way I could do that a couple of weeks ago. I wasn't even standing a couple of months ago, " she said, describing an almost fatal bout with meningitis and lingering pain and paralysis on her right side.

The pigeon pose required her to draw one knee underneath her chest and lengthen and stretch her body long on the mat, while simultaneously pressing her forehead gently into the floor. She succeeded, even on her weak right side.

The Yoga Warrior class, developed in 2005, is part of a nationally certified approach to traditional Hatha yoga that's geared to veterans, active duty military, first responders and their caretakers and families.

For Krupski, who initially balked at trying yoga, believing that it conflicted with her Christian faith, the class and the studio have come to replace therapy, counseling and the gym — "all of it."

"It has been a revelation. It's not a conflict at all, " she said, revealing that she took up daily yoga on doctor's orders.

"It's a bit more individual, based on physical needs, and there's a focus on affirmation and calming through the breath, " said instructor Waters, who took the specialized 16-hour Yoga Warriors training last summer. The former educator feels a special bond with the military and with veterans in the local community. She can identify with trauma. Back in 1989, Waters' husband was a command master chief on the U.S.S. Iowa — and she was an ombudsman for the ship — when a turret exploded, taking the lives of 47 sailors. Recently, as part of her general yoga instructor's training, Waters found herself at the Hampton VA Medical Center for her "karma yoga" requirement — free outreach classes — and relished the experience.

After practicing yoga for five years, the silver-haired grandmother started teaching last year, adding the warrior class in December. "It allows individuals who've experienced trauma to see the positive and to achieve acceptance, " she said, explaining how post-traumatic stress disorder, PTSD, affects not just the warrior but the family.

"Things aren't the way there were, " she said. "The family wants them back; they want to be back — acceptance, deep relaxation, focusing on what is, accepting the affirmations. … That's where the benefits for the families come in."

The affirmations, repeated at intervals throughout the class, are the distinguishing feature. "I'm grounded and centered, " Waters repeated four times as the class stretched before a thoracic twist. "I release all tension and anxiety, " she intoned, as the class followed her in a swan dive. "I'll face life's challenges with an open heart, " she encouraged, as participants held a mountain pose. And, finally, "I forgive myself, I forgive myself, I forgive myself" echoed through the long studio as they lay on their backs, hands behind drawn-up knees, gently rocking side to side.

For Waters, the affirmations were initially the hardest part of the class. "They're not intuitive. I work hard for them not to sound canned, " she said, adding that they're starting to come to her more naturally. The students internalize them; by saying them they become real, she observed. The feedback she has received has made them easier for her to integrate seamlessly.

"The verbal, positive affirmations are required, " said Del Snyder, studio owner, whose husband is an Army veteran and many of whose employees have ties to the military. "The feedback is what makes teaching so wonderful."

There are other aspects of the class that are specifically geared to help the "fight or flight" syndrome that many in high-stress military and first responder jobs typically experience. Careful attention is paid to word choice; poses that might trigger bad memories are avoided. Even the layout of the class, with no open space behind participants, their mats lined up against the wall, is intended to create a feeling of security.

Agustin Manzanares, who recently returned from a deployment in Afghanistan, found his first session deeply relaxing. "That was a cool pigeon sequence, " he said. "I really liked it."

For the final 15 minutes of the hour-long class, Waters turned off the lights and led a Yoga nidra, in which students approach a sleep-like state. "This may be the most challenging pose, " she said, as the class lay flat on their mats. "It's extremely difficult to calm our minds." She led them in tensing and relaxing each body part. "Let your thoughts wash away, as if in the sea, " she said softly.

She talked them through each chakra, or energy center — sacral, solar plexus, heart, throat, crown — as the music shifted from gentle piano accompaniment to the haunting tones of Navajo flutes. "I am who I am. I am whole. I'm perfect just as I am. I'm at one with the universe, " she concluded.

As the soundtrack faded out before coming to a halt, Waters urged participants to return to awareness of their surroundings.

Within seconds, a chorus rose from those on the floor: "I feel much better"; "very relaxing"; "I love your testimony."

Brain scans have shown the areas that nidra affect and their physical connections with different parts of the body, Waters said. One of her private students, placed on heavy anti-psychotic medication for PTSD after returning from Iraq, now takes lower doses and sleeps sounder after just three months. In a phone interview he described the calming effect as "very subtle" but progressing steadily. "Some of the breathing techniques are very helpful, especially when I'm driving, " he said.