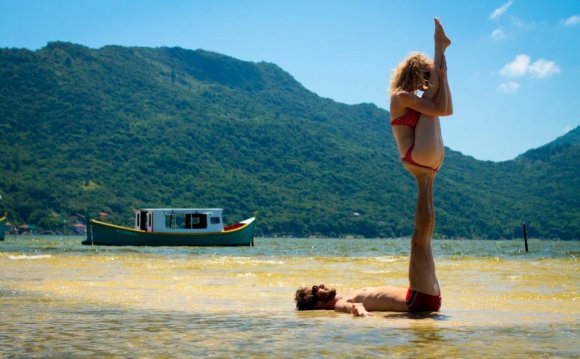 Megan Gendell has performed circus and dance professionally in NYC and around the world since 2007, starting out with the Brooklyn ensemble LAVA and currently performing solo handbalancing and duo trapeze nationally and internationally, including at the Chicago Contemporary Circus Festival and the Golden Karl international circus festival in Riga, Latvia in 2015. She is a 2012 graduate of NECCA’s Pro­Track Program; in 2014 she co­created the evening­length ensemble circus­theater show Tinder & Ash in Montreal through a TOHU residency; and she now calls Philadelphia home.

Megan has taught handbalancing, trapeze, acrobatics, act creation, and more to youth and adults since 2008, first at LAVA and the Espana­Streb Trapeze Academy in Brooklyn, and more recently at the Philadelphia School of Circus Arts and at NECCA in Vermont, where she coached handbalancing, static trapeze, tumbling, flexibility, act creation, and more, working especially with students in NECCA’s first­ and second­year professional training programs (Intensive and Pro­Track), as well as with the Advanced Youth Troupe and recreational students. She has given workshops and master classes around the country, including at the Chicago Contemporary Circus Festival in 2014. megangendell.com

T has always been an artist in some form or another. After a lifelong career in theater, T joined the circus world learning aerials during college. After graduating from Temple University with a degree in Theater as well as the Headlong Performance Institute, with a certificate in Performance Art, he attended the New England Center for Circus Arts’ (NECCA) professional program. T specialized first in aerial hoop and duo rope, then took on the unique double-bar trapeze, and handbalancing/quick change for his graduating acts. T taught at NECCA re-invigorating the aerial hoop curriculum, and other high level aerial classes. During his summers, T is the Head Aerial Coach at Circus Smirkus. Currently, he resides in Boston, teaching at many circus schools across the country. T is one of the most sought after aerial hoop coaches in the country, but when on the ground, T can be found designing and sewing professional costumes or crafting whimsical quilts.

Rain Anya holds a degree in “Performance for Social Change.” She has trained extensively in aerial arts and physical theatre, including immersive programs such as Circomedia (Bristol, UK), NECCA (Brattleboro, VT), and Circle in the Square (NYC, NY). Rain’s aerial career began with the political circus company Wise Fool New Mexico. Out of inspired collaborations there, the seeds for the Paper Doll Militia were sown. With over two decades of experience onstage, Rain’s life’s work is in the integration of circus arts with other performance and movement disciplines. Most recent credits include: Circus Luminous (Santa Fe), London-based Peter Pan, (US tour), and This Twisted Tale (US Tour and Edinburgh Fringe Festival), Chicago Contemporary Circus Festival, Manipulate Festival (Edinburgh, UK) Exposed (Atlanta, GA), and LoopsEnd (New Orleans). Rain has been a passionate instructor of aerial arts since 2004.

Rain’s teaching style focuses on gaining solid foundation, technique, and strength as well incorporating the creativity and artistry of this expressive discipline. Rain has taught studio classes, specialty workshops and private lessons at over 25 aerial venues across the US and abroad. Rain is also Yoga Alliance certified and has extensive knowledge in various other movement forms that inform her distinct style, including a lifelong background in theatre and dance.

Sarah Bebe Holmes’ aerial style is characterized by quality of movement, emotional narrative content, and original innovative choreography. Sarah is co-founder and co-artistic director of LA/Edinburgh based aerial theatre company, Paper Doll Militia. Paper Doll Militia has been creating progressive aerial theatre in the States since 2006 and set up headquarters in Edinburgh in 2013. She has performed, choreographed and taught around the US, UK, India, Lebanon, Egypt, Austria, Germany, Holland, Croatia and Greece.

Sarah is a choreographer and director for circus and aerial theatre productions including Sharashif (Beirut Lebanon), Two and a Half Sisters (Zagreb, Croatia), SnowQueen (Zagreb, Croatia) and RISE (Edinburgh Scotland).

Elena Brocade has been an active part of the American circus community since 2002, both as a performer and as a coach. She began her coaching career at Aloft Circus Arts in Chicago where she helped develop curriculum for recreational and emerging professional students. Elena now lives and coaches at Cirque School in Los Angeles. As a coach she is interested in the movement mechanics specific to each aerial apparatus and using balanced exercises that build agility and creativity alike.

Rachel Sable Stewart is in love with movement. They began their affair with performing as a teenager practicing street theater and object manipulation, and made it official when they attended the New England Center for Circus Arts as part of the Professional Track Program, with a major in aerial hoop and a minor in aerial rope. Since graduation, they have gone on to found Esh Circus Arts, Boston’s premier circus school, and have performed on stages up and down the continent, from intimate experimental shows to big­budget touring circus spectacular. In 2011, they were awarded Best Artistic Performance at the Aerial Acrobatic Arts Festival in Denver, CO. Rachel loves the depth of understanding that comes from teaching movement arts, and they constantly look forward to the interaction and inspiration that come from working with their students.

Jenn is a NASM Certified Personal Trainer with over 10 years of experience in the outdoor and fitness industry. She has been exploring movement through the aerial arts since 2008 via all sorts of apparatuses, including some you’ve probably never heard of! She teaches a variety of classes at VA and is always happy to provide private instruction. You can find out more about her as an aerial performer at heelhang.com.