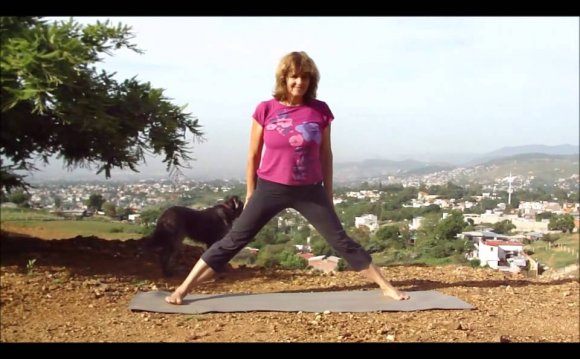 I’ve asked myself this many times since I started taking a yoga class in Virginia Beach a couple of months ago. The answers have changed dramatically.

At first, I asked the question in distress as I rolled out of bed shortly after 5 a.m. on a Saturday . The answer: a rather grim “because I said I would.” When I got to Wareing’s Gym, where Grand Master Adam Nguyen teaches the class, it was dark and chilly, and the tone was half-joking, half-griping. The answer: “This is the sort of crazy thing I try sometimes.”

Soon we were warming up, and my body went into high alert and demanded a serious answer, which was, “I need this to get in shape and deal with nagging pain in my knee, shoulder and wrist. Pain and curiosity – good motivators.” The joy of movement and exertion soon brought another answer to the “What am I doing here?” question: “I’m swinging my arms in this pattern, and breathing in this rhythm. Focus. Do it well.”

But on that first morning, as I tried and failed at pose after pose, dismay crept in. The answer then: “Failing.”

I tried yoga in my early 20s. It was a nice break from the weightlifting, running and calisthenics I’d done for years in connection with sports. With a basic class and a big book, I built a daily routine of poses and exercises. It felt great and kept me limber and solid. By my mid-30s, downward dog poses and sun salutations had given way to kids, marriage, house, etc. Still, I worked in a little yoga. Exercises that were prescribed in my 40s to keep my back from grumbling, which it seemed always inclined to do, resembled yoga, or were flat-out yoga poses.

Now in my 50s, I can open up some time, and have an even greater need to keep decrepitude at bay.

I met Grand Master Ngoc Xuan Nguyen, known as Grand Master Adam, over the summer. He radiates energy, serenity and goodwill. He doesn’t look 64, but when you see him in action it’s easy to believe that he’s been practicing yoga for 59 years. He started as a 5-year-old, studying in Vietnam with another grand master, and began teaching at age 10.

He came to the United States 45 years ago, has lived in Virginia Beach since 1974 and has been training out of Wareing’s Gym for 20 years (though he’s not affiliated with the gym). Besides the classes there, he gives private lessons, does workshops for groups and also can train people in karate do.

He has testimonials from Marines, professional athletes and physicians about the value of his practice, which he has developed from the raja yoga his family taught him.

He likes to say it’s “win-win ... no pain, all gain.” If a pose begins to feel painful, you back off. No matter your age or skill level, he will work with you, at your own pace, to get you into good shape.

In the class I’ve joined, folks in their 60s and 70s pull off very difficult and intricate poses.

“My technique is very different, ” he says – very efficient, productive and effective.

His warm-up is a series of arm-swinging motions from different stances – up and over, down and back, circles, figure-eights. The heart gets going, the blood flows fast, muscles are working and joints are loosening. I had tried a few other yoga classes this year, and while they were great in their own way, none was like this.

He says he has 10, 000 poses and techniques to draw from, and he leads the class through a fraction of them, choosing based on what he feels would suit them best. He calls out a pose and strikes it, and the class goes into the mirror image.

The class can qualify you to be a yoga instructor, but he also says it is a comprehensive class that a beginner can join and work toward the heights of the regulars. I have my doubts as I grunt through my ludicrous attempts at what the poses should look like. Other students, though, reassure me that they once were in the same boat. Now they look like masters. And many have been doing the class for years, which speaks to the value they place on it.

Even twisted and balanced in an unfathomable pose, Grand Master Adam monitors students and gives instruction. Other students give me tips and pointers, too. They are good teachers.

At times, things are quiet and serious. At times, pairs of students, some of them old friends by now, talk quietly as they stretch. Grand Master Adam shares inspirational patter or a story from the week, often punctuated by his gleeful laugh. Always, there’s “Shake it loose. Shake it loose.”

As we work on a series of stretches and poses that seem to go on forever, I wonder how I’ll get through the inevitable repeat in the opposite direction. But I do. While there’s no pain, there must be effort. I’m slowly getting closer to almost pulling off some of the poses. That doesn’t matter so much anymore. At the end of each class, I have the flushed feeling of an excellent workout.

Unlike other heavy workouts with weights or doing pushups and the like, these sessions are not followed by sore muscles. Instead, I find that chronic joint pain – back, shoulder, wrist – is gone or fading. I’ve shaken it loose.