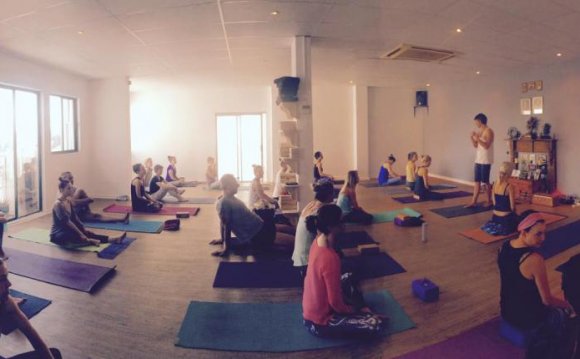 The word "yoga" means union, a bringing together. In the case of Center of Gravity, a yoga and Pilates studio in downtown Lexington, that meaning applies both to the business partners who founded the studio in 2015 — Wendy Orrison and Donna Williams — and to the community they have gathered in downtown Lexington.

Prior to this new phase of her career, Orrison spent 14 years at W&L as the head coach of field hockey and the assistant coach of women's lacrosse. Before W&L, she coached at Hollins University. In addition, she has taught aerobics, CPR, women's health and yoga.

At Center of Gravity, with the assistance of other teachers, they offer several styles of yoga, plus Pilates, Qigong and its relative Tai Chi, and barre.

Williams and Orrison — friendly and thoughtful, toned and graceful — are their own best advertisements for the mental and physical benefits of yoga. A couple of years ago, as running buddies, they got to know each other and realized they shared a common dream: opening a yoga studio.

Williams and several other yoga teachers had been conducting classes in various locations around Lexington, but none of those places embodied "what I thought of as the atmosphere of a true yoga studio, " says Williams, "where people can feel that nurturing of a real yoga studio without going into a gym."

Williams had long pondered the question of Lexington's possible support for such a haven. "I was never going to know the answer unless I did it, " she says. "And I was just really curious to know. But I never wanted to do it by myself. And then I met Wendy, and I was literally not able to stop this thought from popping into my head: ‘You need to ask Wendy.' " So she did.

Orrison's response: "Let's do it tomorrow." She explains, "I felt a sense of urgency because I was very certain someone else was going to open a yoga studio. We need to be the first yoga studio, because there's not room for two."

The partners began their search for their headquarters. "We both agreed on this immediately: We have to be downtown, " says Williams.

Orrison concurs. "We wanted to be accessible to the universities but also to the downtown businesses. We wanted to support them. We joined Main Street Lexington right from the beginning, and then we joined the Chamber of Commerce. That's important to us, to be a part of the Lexington community. "

"We want to feel part of the downtown energy, see people walking down the street with their yoga mats, " says Williams. "And close enough that people from W&L could walk here; that was so important."

"We looked at a few buildings outside the five-block area [of downtown], but we knew what we wanted, " says Orrison. Their quest led them to a former photography studio on the second floor of a building on West Washington Street. "The moment we saw this space, we knew this was it, " adds Williams.

A year and a half into their adventure, Orrison sums up the community response to Center for Gravity: "Phenomenal."

They appreciate their downtown neighbors, the fellow business owners who have supported Center for Gravity. A few of them even attend classes. Overall, their clientele comprises "mostly professional adults, " reports Orrison.

Williams points out, "We really are trying to draw in communities that might not think of us first." As a result, they offer classes for teens, kids and families, and even advertise at the Virginia Horse Center. She says that being the only yoga studio in town means that when visitors to Lexington do an internet search for "yoga and Lexington, " "we always pop up, so we definitely get some outside visitors."

The partners say they would love to enroll more W&L students. With its calming, invigorating effect on body and mind, yoga could be beneficial for them, says Orrison. As a former coach, though, she understands the demands on a student's time. "Do I write a paper, or do I go to a movie with my friend, or go to yoga? We've all been there."

As proud business owners in downtown Lexington, muses Williams, "I kind of hope we make the downtown a little more alive, in that all the people coming to yoga then walk out down the street and buy their book and their coffee."

"We wanted to provide a different experience, and Lexington had nothing like that, " continues Williams. "If it was just a business, there might be other businesses that would be more lucrative, but we were definitely looking for something more."

"We really wanted it to be kind of a community place, " Orrison confirms. At this year's summer solstice, she hosted a potluck at her house for clients of the studio. The convivial gathering, she says, "was what I hoped the studio would become. More than just a class."