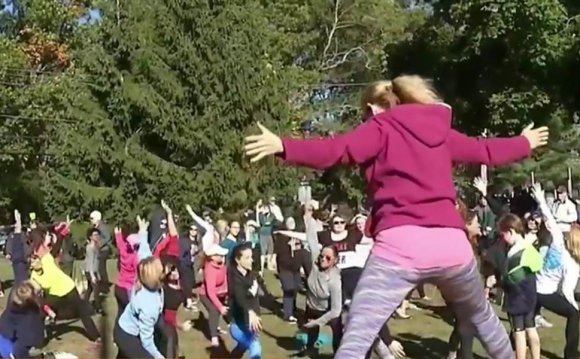 The parade, which is scheduled for Oct. 23, was planned in reaction to a recent newspaper editorial by a man who said he's seen enough.

Barrington resident Alan Sorrentino's “Letter to the Editor” was recently published in the Barrington Times. It was titled, “Please, women, put away the yoga pants.”

In it, Sorrentino calls yoga pants the "absolute worst thing to ever happen in women's fashion, ” as he believes "they do nothing to compliment a woman over 20 years old.”

“Not since the mini-skirt has there been something worn by so many women who should never have it on in the first place, ” he wrote. “Yoga pants belong in the yoga studio. What’s next? Wearing a “Speedo” to the supermarket? Imagine if men did that. Yuck!”

Sorrentino went on to note that he believes yoga pants are “adorable on children and young women who have the benefit of nature’s blessing of youth. However, on mature, adult women there is something bizarre and disturbing about the appearance they make in public. Maybe it’s the unforgiving perspective they provide, inappropriate for general consumption, TMI, or the specter of someone coping poorly with their weight or advancing age that makes yoga pants so weird in public.”

He signed off with, “to all yoga pant wearers, I struggle with my own physicality as I age. I don't want to struggle with yours.”

Sorrentino's words were met with more than a few negative comments.

A Facebook event created for the event invites women, as well as yoga pants supporters, to take part in the parade, which will process in front of Sorrentino's home on Knapton Street.

At last check, more than 100 people signed up to attend.

“I wear yoga pants/leggings just about every day because they are clearly the most superior clothing item in regards to comfort, ” one woman wrote on the event page. “So, I'm already sticking to Mr. Sorrentino!”

Another woman wrote, “Who would ever take the time to write this to a newspaper? Oh my God, perhaps he should spend his time actually helping someone else in need. What a jerk.”

The Barrington Times commented about the newspaper’s decision to publish the letter, noting that “we have maintained the tradition of attempting to publish every letter we receive, adhering to standards for libel and ethical content. In this case, Mr. Sorrentino is not attacking any individual nor specific group.”