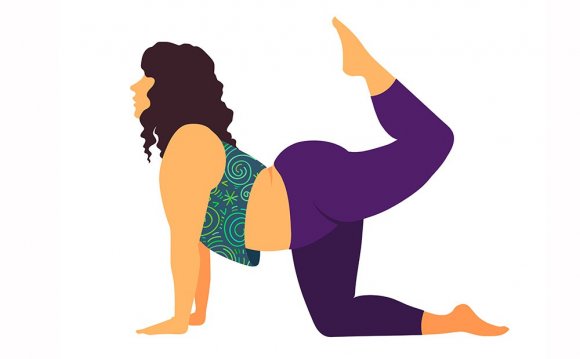 We have all been newbies in a yoga class, watching everyone breathe, stretch, and move in smooth unison while we sweated profusely, discovered previously unknown muscles, and moved like a newborn deer. Now, we are finally getting the hang of it, but apparently it’s too late – people are doing yoga on horses like it’s not hard enough already. What the hell.

Horseback yoga has been practiced for some time in isolated areas and private practices, but now it has become popular at Spain’s La Donaria, an eco-friendly resort nestled right outside of the Sierra de Granzalema Natural Park. Led by Spanish yoga instructor Laura Garcia, horseback yoga gives yogis a change to strike their favorite pose on the back of a ginormous horse. There are approximately 70 horses on La Donaria’s 600 acres who serve as yoga partners when they aren’t working as show horses.

La Donaria CEO Manuel Rosell spoke to Nikki Ekstein at Bloomberg and said it took a while to find a horseback yoga instructor who had the perfect connection with both the horses as well as the clients. And, according to Garcia, horseback yoga (which focuses on a type of yoga called Kundalini) can be done by almost anyone, including a person with no experience.

Horseback yoga at La Donaria is actually pretty inexpensive, at $65 dollars a class. And, the idea fits perfectly with the expected clientele at the resort. People who love La Donaria’s nature-friendly vibes will probably be interested in getting up close and personal with beautiful horses in an unorthodox way. However, there are also horseback yoga classes right here in the United States, like Salamander Resort in Middleburg, Virginia.

While it seems adventurous and interesting, I don’t want to test my yoga moves on the back of a horse. What ever happened to the good ole days when Hatha, Bikram, or Vinaysa yoga was done with some part of our body firmly on the ground? Yes, there’s the option of doing horseback yoga beside a horse, but who wants the pressure of a well-accomplished farm animal staring at you while you perfect your poses? Just thinking about it makes me want to quit before I start. But, if you don’t mind the added pressure and love horses, then go for it.