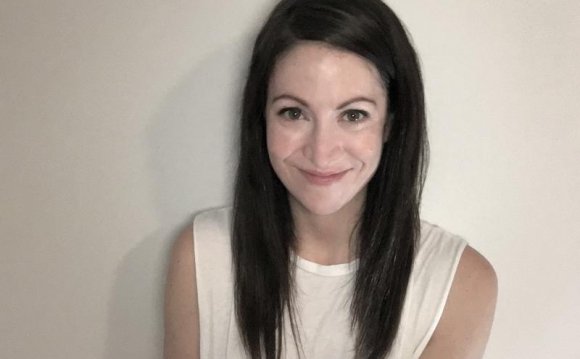 During a 75-minute kundalini yoga and meditation class at Lighthouse Yoga Center in Petworth one Saturday morning, eight women stood and bent at the waist, letting their arms hang loosely as they swung them side to side in gradually larger swoops for about seven minutes.

This twist through the thoracic spine opens the shoulders and chest, instructor Julie Eisenberg told the group — pretty standard stuff for a yoga class. But this move has another goal: to “get the lymph flowing through your body to pick up toxins and get them out, ” Eisenberg said.

The movement is called a kriya, or sequence of exercises. Kundalini, which roughly means “energy, ” is based on kriyas, which can be a static pose or a repeated movement held for three to 11 minutes. They work to stimulate not just muscles but deeper internal systems.

“When you leave, you feel lifted, ” said Cathy Berry, 42, of Silver Spring, a student and teacher at Lighthouse. “It’s almost like a natural high.”

Eisenberg opened Lighthouse about five years ago to offer kundalini yoga along with better-known forms such as hatha, which focuses on alignment. Now, the kundalini classes are the most well-attended, she said.


They differ from better-known yoga styles such as vinyasa, or flow, and ashtanga, or power, in several ways. First, sound is an important part of kundalini. You won’t find pop music coming out of the speakers at a kundalini class, said Andrew Tanner, chief ambassador for Yoga Alliance, an Arlington-based nonprofit group representing yoga teachers, schools and studios. Instead, practitioners chant mantras through some kriyas to help them focus their minds and breath.

At the end of her class, Eisenberg plays a gong for five minutes while students sit or lie quietly. These gong baths, as they’re called, aid relaxation through the instrument’s vibrations. Eisenberg follows that with a meditation that is chanted in unison.

“It’s like walking into a whole different universe, ” she said.

But it’s an accessible universe, she said.

“It doesn’t matter if you’re not flexible, ” Eisenberg said. You will become more flexible through practicing it, for the most part. You’ll become stronger without any doubt.”

There are thousands of kriyas, so a kundalini class is different every time, but some exercises repeat frequently.

Breath of Fire is one of them. To do it, sit cross-legged with your hands resting palm-up on your knees with your pointer fingers and thumbs touching. Close your eyes and look up and in toward the center of the brows at a spot known as the third eye, or the seat of intuition, and then begin to inhale and exhale rapidly but evenly as you say quietly or aloud “sat, ” meaning “truth, ” on the inhale and “nam, ” or “name, ” on the exhale. Continue for three minutes to rebalance the glandular system.

“It’s not necessarily a hard movement, but if you do it long enough, it will be very challenging, ” Tanner said of kriyas. “They’re not necessarily focused on, say, elongating muscles, whereas in a classical yoga class you’re doing asanas, the postures, as a way to increase mobility and flexibility and prepare the body for seated meditation. In a classical kundalini class, you’re really doing stuff to stimulate your energy.”

For some, the results can be almost immediate.

Guru Jagat, 37, a practitioner and instructor who Tanner said is making kundalini “cool, ” said she felt a difference after just 20 seconds of her first class. “The way it’s designed is to get your endocrine system to secrete and to balance very, very quickly, and the endocrine system — the glands — are the guardians of our health, ” said Jagat, who grew up in Washington County, Md. “All of our breaths and these little practices that we do are basically stimulating the hypothalamus, the pineal and the pituitary glands. [They] secrete very quickly and when that happens, you start to feel more alive, more clear-minded, more in your right action.”

Other benefits of kundalini are weight loss and stress and blood pressure reduction, practitioners say. More specifically, a 2016 study by the University of California at Los Angeles found that three months of yoga and meditation minimized the effects of dementia, often better than traditional memory-boosting exercises. The Alzheimer’s Research and Prevention Foundation points to the 12-minute Kirtan Kriya singing exercise in particular as a way to improve brain function.

Kundalini has its roots in ancient practices but came to the West only in the late 1960s, when Sikh leader Yogi Bhajan left India and began teaching classes in Los Angeles. Since then, the style has largely been on the fringes, but it’s gaining popularity. Last May, the first Miami Beach Kundalini Yoga Festival was held, and the American College of Sports Medicine includes kundalini as one of its top 10 fitness trends for 2017.

Jagat’s RA MA TV is another example of kundalini’s growth. It started with a few subscribers and now broadcasts classes and workshops to 10, 000 subscribers in 180 countries.

One reason for the uptick might be simple math. The number of U.S. yoga practitioners jumped to 36.7 million in 2016 from 20.4 million in 2012, according to a survey by Yoga Alliance and the Yoga Journal. “There’s more people doing yoga in general and then a subset of [those] people are going to be drawn to kundalini, ” Tanner said.

Still, kundalini makes up a small portion of yoga classes.

To try kundalini yoga in this area, check out Lighthouse, Flow Yoga Center in Northwest Washington; Sky House Yoga in Silver Spring, Md.; Radiance Yoga in Alexandria, Va.; and Raj Yoga in Sterling, Va. Guru Jagat will hold workshops to launch her new book, “Invincible Living, ” Jan. 14 from 1 to 3 p.m. at Tysons Corner Center and Jan. 15 from 9 to 11 a.m. at Kit and Ace in Georgetown.