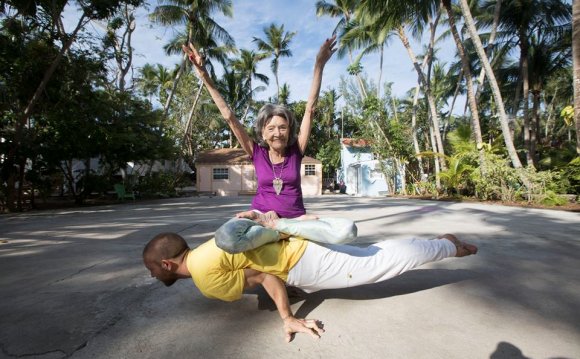 The latest breed of star to come out of social media is the so-called “yogalebrity” - they’re young, lithe, lycra-clad and all over Instagram in bendy positions.

But there’s one who is very much the exception to the rule: 98-year-old Täo Porchon-Lynch from Hartsdale, New York.

And unlike the majority of all-natural, vegan yogis, Porchon-Lynch wears big earrings, has brightly-painted nails, is always in high heels (well, except for when she’s doing yoga) and she loves wine.

In fact, Porchon-Lynch drinks just two beverages: wine and tea (never water). So into her vino is the nonagenarian that she founded the American Wine Society with her late husband in 1967.

After he died in a motorcycle accident in 1982, Porchon-Lynch threw herself into yoga - she now teaches five times a week and travels round the world leading workshops in exciting places.

Porchon-Lynch has always led an exotic life though - she was born in India, moved to London in 1940, danced for soldiers in Europe and then moved to Hollywood. Over her years, she’s spent time with Mahatma Gandhi, Noël Coward, Marilyn Monroe and the Dalai Lama.

It was growing up in India, however, that Porchon-Lynch discovered yoga: at the age of eight, she spotted boys on the beach contorting their bodies into strange poses. “I went to my aunt and said, ‘Can they let me be part of it?’ And she said: ‘That isn’t a game, it is yoga and it’s not for girls. It’s not ladylike.’ So I started doing it, ” Porchon-Lynch told the New York Times.

She may have had three hip-replacements but still drives herself around in her Smart car and is frequently recognised in the street.

Porchon-Lynch rose to public attention in 2012 after photographer Robert Sturman shot pictures of her in Central Park, New York, and posted them online. They went viral and she became a social media sensation.

Three years later, Porchon-Lynch appeared dancing with a 26-year-old on America’s Got Talent - her performance was described by the judges as “too mind-blowing for words.” She dances competitively when she's not teaching yoga, mainly with men 75 years her junior.

In a world where few things seem as valuable as youth, Porchon-Lynch is a breath of fresh air, which has not been lost on brands - she recently took part in a photoshoot for Athleta, an athleisure brand owned by Gap Inc.

She’s the glamorous, wine-drinking, yogalebrity the whole world wishes was their friend.