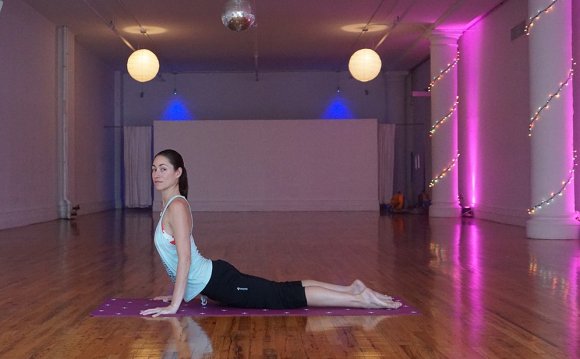 Tara Stiles will make you love yoga, even if you didn’t think that could be possible. Molly Hurford

Bicycling may earn commissions on products that are independently selected by our editorial team.

Tara Stiles is a big personality in the yoga world, but she’s not like most yoga teachers. She’s practicality meets spirituality, wrapped up in an infectiously fun package that will make even the most hardened-against-yoga cyclists consider starting a daily practice. We caught up with her after a class at her studio in NYC where she teaches classes in Strala Yoga, a blend of poses she’s developed that make you stretch, sweat, and generally feel pretty great about life. We know that yoga is great for cyclists, especially ones prone to injury and muscle tightness, but it’s not just about the stretching; for Stiles, yoga is about the mind-body connection. And that won’t just help you on the mat: It will help you on the trail too.

Bicycling: What drew you to yoga?
Tara Stiles: I grew up really simple, out in nature, always breathing and meditating and feeling good. I did classical dance growing up, and we had yoga in that program, and at that point, I was surprised that it was a thing people did. But then I was looking at my friends in high school and how stressed they were and how they had things like back pain, and I was like, "Oh, try this pose, it’ll help, " or, "Oh, you’re hungover, try this and it will help." I was trying to make it goofy so my friends would do it. People didn’t believe it could cure a hangover, or some ailment, but why not? It can help.

What’s missing from other yoga that led to Strala?
Yoga felt like you had to act, talk, and dress a certain way and it felt a lot like high school. I saw a lot of people having misconceptions or not enjoying yoga, or going to classes and getting injured because they were getting pushed by the instructor into positions they didn’t want to be in. I also felt like the benefit of yoga was in going from movement to movement, and I think if you’re just getting into a position and staying there, you’re not necessarily getting that much benefit. It’s how you get in and out of everything.

How does Strala yoga benefit cyclists?
People don’t always come to Strala to get good at yoga; they come here to get good at the other things that they do. We don’t put emphasis on getting into extreme positions. It’s about feeling good in your body. It’s also about that idea of flow state. For high-level athletes, that flow state is where time and space don’t really feel real, you’re just in the moment and going. You’re doing something that isn’t normal, you’re exceeding what’s usual for you. I feel like that’s a form of meditation, in yoga and on the bike.

Where does meditation fit in for cyclists?
I know a lot of cyclists don’t have time for full meditation, but just taking a bit of time to focus on your breath is important. It’s not about seeing a clear blue lake or anything, it’s just about being able to guide your attention back to the breath and keep it there, and that improves focus, which can help your riding.

Are there problem areas you often see in cyclists?
It’s not that there’s a specific problem. Your goal is to continue to be good at what you’re doing, not to get good at yoga, right? So it’s about finding a healthy range of motion, not going to extremes. I get why a cyclist would feel like yoga is a waste of time. But if you have a good range of motion, you can breathe better on the bike. It’s not just about tight hip flexors—having better mobility everywhere is important to being able to breathe and flow better on the bike.