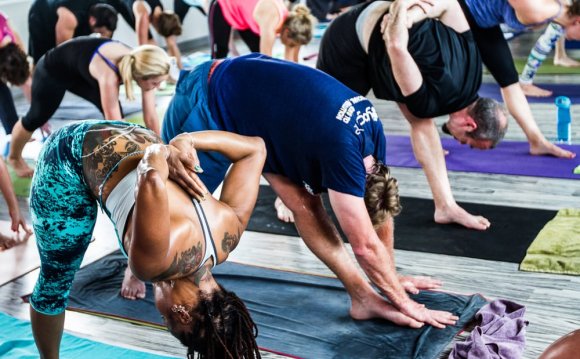 At the age of 19, Arriaga, now 31, enlisted into the United States Marine Corps to escape the everyday struggle of growing up in the South Bronx. He went on to become a Field Artillery Cannon Crewman, and deployed in support of Operation Iraqi Freedom in 2005 and 2006. Upon being Honorably Discharged as a Corporal, he relocated from his hometown of New York, to sunny South Florida.

“I was in a dark place, unwilling to look inside myself” he said detailing his post war experience, “some days it was even hard to get out of bed”. His struggle continued until he decided to dedicate his life to service and found yoga, or as he would say, “Yoga found me.”

While participating at an indoor rock climbing event held by the Miami VA recreational therapy program, Beardman was invited to do Rock Yoga. After a few classes, he was hooked. He knew that he was in need of healing and later began a study held by Nova Southeastern University and Connected Warriors, a non-profit dedicated to providing yoga to veterans and their families. After about 12 weeks of classes and two, week long yoga odyssey’s sponsored by Wounded Warrior Project, Hipolito was offered a scholarship to become certified as a Power Vinyasa Yoga instructor.

He accepted the opportunity and began the weekly 4-hour drive from Ft. Lauderdale to Jacksonville Beach, FL. Room and board, food, nor lodging was provided and did not deter him at all. On the eve of his graduation, Arriaga completed 200 hours of training and will be receiving a certification. As of right now, there are no exact next steps; however, he is conscious of the opportunities and trusts that the universe will provide the path.

When asked why Yoga, he responded, “If not, I would still be lost in the fog of war. I don’t need war; I need love…Yoga is a way of life that allows me to be authentic to myself.”

While staying true to the quote by Rumi, “Yesterday I was clever, so I wanted to change the world. Today I am wise, so I am changing myself.”, Arriaga insists that although he is becoming an instructor, he is still a student.