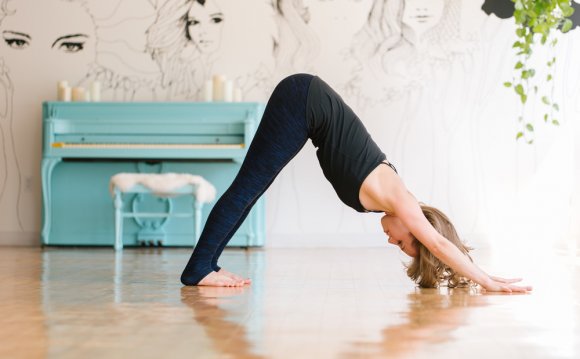 I thought I’d said all I wanted on body image and yoga in my last post but controversy in the yoga world regarding a certain video has left me feeling I didn’t say nearly enough. Or say it clearly enough. So let me try again.

The taut and toned ‘yoga body’ on display in the media marketplace is a lie. It is NOT obtained from a regular yoga routine (as many would have you believe) – no, its obtained at the price of constant work, a Herculean effort to burn calories, and a saintly denial of carbs.

The implication that rippling abs can be yours with a couple of yoga classes a week is obviously motivated by profit. It is the creation of yoga studios who want you to buy more classes, and of corporations who want you to buy all the necessary yoga accoutrements your ‘yoga body’ needs (pants, mats, water bottles, mat holders, towels, mat cleansing mists, and even your underwear).

But the point of this post is the shocking depth to which this lie has permeated the yoga world. It seems no one, not even half-starved yoga superstars, will admit that the emperor has no clothes.

Case in point, Kathryn Budig’s article in Huffington Post pleading with us to stop judging her and other yoginis who strip down to sell products. Budig’s post defends a video advertisement in which we spy upon the early morning yoga routine of a near naked limber yogini Briohny Kate-Smyth who is performing in Budig’s words “awe inducing asana in her lingerie”.

Set in a luxurious bedroom, with a handsome young lover asleep on an acre wide bed (on what are doubtless 800 thread count sheets) the yogini moves with complete and awe-inspiring control over her body against a backdrop of wall to wall windows (revealing the skyscrapers of capitalistic success). The camera lovingly caresses each part of her cellulite free body, her concave belly, her taut buttocks, her ripped biceps.

The video’s tag line reads “Equinox’s Briohny Kate-Smyth shows there’s no limit to what the artfully honed yoga body can do.” Her discipline and control (and sexy underwear), the ad implies, have given her the power to have it all.

Budig is the naked ‘yoga body’ in the famous Toe Sox ad for which she received much pillory and now the feet of her former student Smyth are similarly on the fire. Budwig defends Briohny and herself against criticisms that these ads sexually objectify women by stating “ Our intention was to inspire and show the beauty of a body that practices regular yoga.”

Most of the following commentary on Budig’s article and Briohny’s Equinox ad, veers between two poles – this is just the same ole sexual objectification of women versus those who claim it is glorification of the beauty of the female form.

But what no one seems to mention, is the glaringly obvious fact (at least to me) that this is NOT what a body that regularly practices yoga looks like – and I’ve been practicing yoga for 15 years for Pete’s sake!

C’mon folks, let’s get real. The body featured in the Equinox ad is not result of regular yoga practice, it’s the body of a finely honed athlete, a dancer, someone who pushes their body to the limits. This is a body in training – but in training for what? To mistake yoga for a performance or a competitive sport goes a long way explaining why yoga “wrecks your body” as the recent article causing such a furor in the yoga world points out.

To think that one emerges carved and rail thin as a result of a regular yoga routine begs the question – what kind of routine are we talking about? A punishing daily routine of Power Yoga in 101 degree temperature is what.

The ‘yoga body’ is a fiction, and its a fiction judging by the favorable commentary on Budig’s post and the video, that many are buying. Numerous comments in the thread were positively yearning ” ….“I only practice yoga twice a week and know that I’ll never achieve that, but it’s still a goal to work toward….. I only hope to achieve your level after years of practice… I’m inspired even though I just got started with yoga….The control she has of her body is astounding! This is inspiring me to take up yoga!”

She writes “I’m starting to think that the best policy is to let my silence speak louder than my words… because this is what the brand wants (this is the intention behind the video: not to show a “powerful” or “empowered” or “beautiful” practice; it’s viral marketing, and its ROI – return on investment – is determined by how many people are talking about it, how many click-throughs they get).”

Blogger Carol Horton, in her comment on Harvey’s post, agrees that silence might make these ads less viral but she also suggests that “ there are in fact some people out there who are learning something from these arguments.”

Yes precisely. Silence is a plausible strategy if the target of such campaigns were mature yogini’s such as Harvey – but they’re not. The target is those young women at risk of eating disorders and depression, who on seeing this ad might feel they don’t measure up. Who might feel that if they just pushed themselves further, ate a little less…and so the cycle of eating disorders and depression continues.

Not to mention the hundreds of thousands of women out there already practicing yoga, who by comparing themselves with this image, might just think there’s something wrong with them….maybe if they just worked a little harder, ate a little less….

But I don’t think the debate should be about whether such advertising objectifies women, of course it does -the debate is about what we can do about the underlying attitudes that allow it to flourish.

The real questions no one is asking are these – why do so few yoga teachers admit that they work hard to maintain their fat-free physiques?Why does the yoga world, from the cover of Yoga Journal to the glossy advertising of main stream studios, continue to display the “yoga body “ as a norm? Where are the images of average woman with rounded thighs and obvious bellies, women who practice yoga with regularity and passion?

Perhaps they are absent, if we are honest with ourselves, because we don’t want to give up the fiction? Ads like Equinox transfix because we have bought into the underlying premise that the yoga body is worth having, that it is a currency by which we purchase success .

Lets face it, the yoga body is not a healthy ideal. It is a body overworked and underfed. It is not the result of regular yoga classes but the result of a narcissistic obsession with working out. And it is driven less by empowerment than by feeling ‘fat and inferior’ as Briohny herself states in Budig’s post.

This is the Beauty Myth, that feminist author Naomi Wolf has written so eloquently about. A myth that by keeping us chained to self loathing, robs us of energy, time and money, and prevents us from achieving real power in the world.