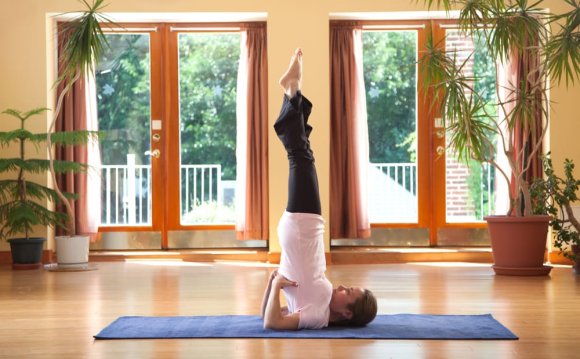 He’s a student of poetry, modern literature and moral philosophy who’s chosen hard labor over academics; a bass player who works late hours at clubs, then greets the dawn from a mountain ledge; a yoga teacher who tells his students that the highest good is to make sure the unloveable among us have a chance to feel loved.

Shelton Sprouse doesn’t see any contrasts within himself. The three threads — yoga, stone masonry and music — are so intertwined in his life that he can’t pull one out and follow it from beginning to end.

It’s like this, he said: “The music’s easy — think back to 1963 when I was just beginning high school, and John, Paul, George and Ringo came along. Who didn’t want to play bass?”

The stone masonry goes back that far, too.

The summer before his senior year at Albemarle High School, his father, a long-time carpenter, enlisted his help on a project involving a huge cement-block foundation. The younger Sprouse was just a mortar mixer — a carrier or a “tender.” But he quickly understood the rhythm of the work and the painstaking pace of building.

“He believed in the power of mental discipline, isometrics and long, slow stretching, ” Sprouse recalled. “He had a huge influence, not just on me, but on all of us.”

After high school, Sprouse started a band, went to college briefly, and had a stint as a stone mason’s assistant. “I’d watch him and think, ‘Why’s he putting that rock there?’ or ‘Why doesn’t he just turn that stone around?’”

Sprouse found that he could look at a field of stones and know just where each should go on the wall. His vision was clear. He was to be a stone mason — and his own boss.

By 1971, Sprouse had a business license and began work in partnership with Johnny Mac Apperson. Starting with chimneys and small projects, the two went on to progressively bigger and more prestigious projects.

“Here’s where the yoga comes in, ” Sprouse said. “This is a serious business. Any small mistake and you can crush a hand or break your foot or have a serious fall. You’ve got to have balance and concentration.”

He found that he could prevent the minor injuries of his trade — sore back, stressed shoulders, pulled tendons — by constant stretching and flexibility exercises. This has enabled the craftsman to continue working into middle age and allows Sprouse to sustain the energy necessary to do the restoration projects — some take several years — that especially interest him.

Sprouse identifies a 1978 job rebuilding the east wall of Jefferson’s vegetable garden at Monticello as his big break, one that opened the door to additional historic preservation jobs at Monticello, work at Jefferson’s Poplar Forest and at the University of Virginia, including Carr’s Hill. His body of work won Sprouse an American Institute of Architects’ award and attention from Smithsonian magazine.

Often working with stones that had fallen from the original wall into the field, he and Apperson rebuilt it in the footsteps of Jefferson’s enslaved people, in some places integrating the stone into the few fragments that remained. Often an archeologist was on site to appraise and categorize the buried nails, shards and — in one instance — a stash of wine bottles that might be what Jefferson reported missing from an 1804 wine shipment to Monticello.

It’s not just his art that keeps Sprouse in demand, though.

“I’m local, I’ve been in every field and river valley within miles and I know where the rocks are, ” the stone mason said.

He’s often called upon to supply local rocks for projects, even when he’s not the builder.

Apperson retired shortly after the turn of the century. In the past couple of years, Sprouse has been joined by Diana Hale, a young woman who also works as a photographer, filmmaker and has a vintage jewelry business on Etsy. He’d known her for years and observed she was preternaturally strong — strong enough to move and lift the heavy stones required for their work.

Sprouse and Hale have embarked on a new project. In addition to being able to deliver and build with the plentiful rocks strewn through the area’s meadows, they know where to find special rocks, the ones that might serve as a centerpiece for a zen garden or small reflecting pool. Sprouse has great respect for these ancient stones. “They’re serene, ” he said. “That’s why people want them.”

Sprouse lives simply, has never married or owned a home and drives a 1989 Ford F-150. His friends tease him about living on cabbage and coffee. But he has no plans to retire from stone masonry, music or yoga, believing all three to be essential to continuing the work he’s invested in. “It’s all about finding the best life, the highest life, ” he said.