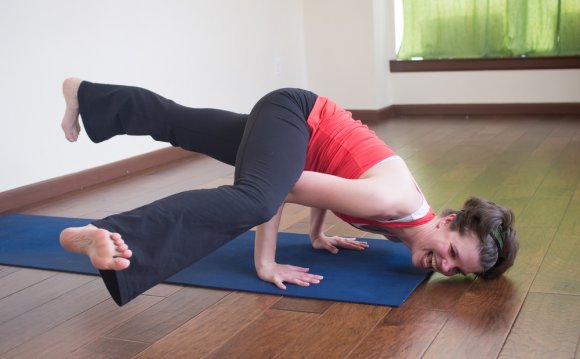 A VA study published recently in the journal Stroke reveals that starting yoga — even long after you’ve suffered a stroke — may noticeably improve your balance.

“It’s an exciting thing, ” said Dr. Arlene Schmid, a rehabilitation research scientist with the Roudebush VA Medical Center and Indiana University in Indianapolis. “People — even older people — can improve their balance years after a stroke. They can change their brain and change their body. They’re not stuck with what they have.”

For the study, Schmid and her team recruited 47 stroke survivors who’d experienced a stroke more than half a year before. Seventy-five percent of these subjects were male Veterans — including some from World War II. Their average age was 63, and their average time since having a stroke was about four years.

Ten of the study subjects received no therapy, while the other 37 received a specialized, modified version of yoga developed by a yoga therapist and Schmid’s research team.

“People can improve their balance years after a stroke.”

“At first, many of the Veterans were skeptical about the therapy, ” Schmid admitted. “‘They told me, ‘Yoga is for girls, yoga is for hippies.’ After a couple of yoga sessions, though, and with a little encouragement from their wives and our research team, these guys came to appreciate yoga and the impact it could have on their disabilities.

“It was initially a hard sell, but by the end they wanted more, ” Schmid continued. “They practiced seated, standing, and floor-based exercises like the modified pigeon pose and the mountain pose, twice a week, over a period of eight weeks. We made sure the exercises gradually became more challenging as time went on. By the end, the yoga group was showing significant improvement in balance.

“The yoga practice also boosted their confidence, improved their sense of independence, and reduced their fear of falling, ” she observed.

According to the VA study, nearly three-quarters of all stroke survivors suffer from falls. Some of these falls can break bones, and some can even be fatal.

“In addition to physical harm, strokes can also contribute to depression, ” Schmid noted. “Our study sends a very positive message about the ability of stroke survivors — especially older stroke survivors — to improve long after their first post-stroke year.”

Schmid said additional studies are needed to confirm yoga’s effectiveness, and that yoga therapy is not readily available yet.