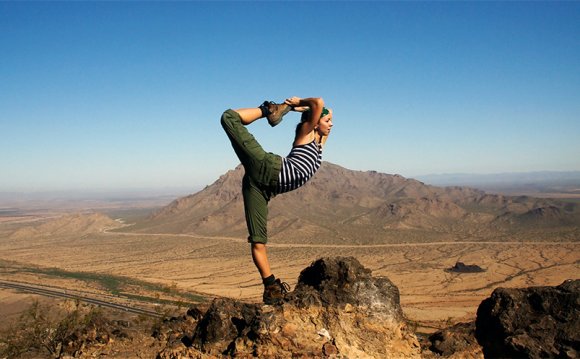 JAMES CITY—Three women and a reporter are laying on paddleboards in Gordon Creek, arms floating in the water, staring at the sky

"This is your savasana, " a voice says.

The group is told to exhale, to let go, to take as much time as they need.

A sudden chorus of frogs in the reeds disrupts the savasana, which is the Sanskrit phrase for lying flat. But the voice ignores the frogs.

"The ego says, once everything falls into place, I will find peace, " says the voice. "But the spirit says, find peace and everything will fall into place."

The voice belongs to Lori Erwin, the owner of Paddle On of Williamsburg. For the past hour, Erwin has been seated, legs crossed, on a paddleboard anchored in the middle of Gordon Creek. She has been calling out a variety of poses as she leads a group through a session of paddleboard yoga.

Erwin rents paddleboards, provides paddleboarding lessons and, through paddleboard yoga classes, expands people's expectations of what they can do on a paddleboard.

On Wednesday evening she taught three yogis — Patti DeBlass, 54, Joanne Henk, 58 and Leslie Reeser, 50 — and me, a neophyte to both paddleboards and yoga, how to combine the two activities.

The session began at the boat launch in Chickahominy Riverfront Park. Erwin set up each participant with a paddleboard, paddle and anchor. Paddleboards are similar to surf boards, but are longer and wider. Boarders stand upright with their toes pointed to the front of the board, rather than getting into a surfer stance.

The group paddled about 100 yards to an open area, just upstream from the Chickahominy River. The water was warm, which I was the first to discover when I fell in while trying to get my reporter's notebook out of a plastic bag.

Erwin reminded us all that falling in was part of the joy.

"There is no judgment here, " she said. "If you fall, you will fall into the water and cool yourself off."

In spite of her reassurance, the falls were few. The yogis anchored their paddleboards and faced Erwin, who called out poses from her board.

"Low lunge, " she called to the group.

The three yogis, lunged forward on one knee, lifting both arms to the sky.

"Easy pose with a twist, " she called.

They bent into a seated position, eventually twisting their torso so their left elbows rested on their right knee.

The yogis balanced on one hand and one knee with the others extended in front of and behind them.

They sought their inner peace and tried to avoid falling in the water while I snapped their pictures.

If a reporter threatening to capture them in awkward positions and write about it in the newspaper was a distraction, they did not show it.

Henk's skill shined through each pose.

With both hands planted on the board she slowly lifted her right leg over into the air until it was pointed straight up at the sky. She perfectly formed three fourths of an X, a series of poses known as a "three-legged downward dog into a scorpion."

The position seemed like it would be difficult to achieve even if on solid ground, much less balanced on water.

"You really have to focus in and find that balance, because you are not on solid ground. You are on a little rocking board, " Erwin said.

But they all insist it is not as hard as it might look.

"I don't think it's as difficult or as scary as people would anticipate it to be, " Henk said.

"When I first got started, it was really windy and the water was a little bit choppy, and I was a little frustrated, " Reeser said. "The next time the water was very calm it wasn't very hard at all to stand up. But it's not like we don't fall off we all fall off. That's part of the fun."

The participants enjoyed smooth water from the opening "ohm" to the knees-to-chest move when we each curled into cannonball positions on our boards and gently rolled back and forth on our spines.

After about an hour, Erwin wrapped up the session. We pulled up anchor and she led us back to the boat launch.

Afterwards, Reeser talked about what makes doing yoga on a paddleboard so special.

"Just being in sync with the world around you, the winds, the sounds, the smell of the water, what don't you love?" Reeser said. "And the frog serenade was pretty cool."