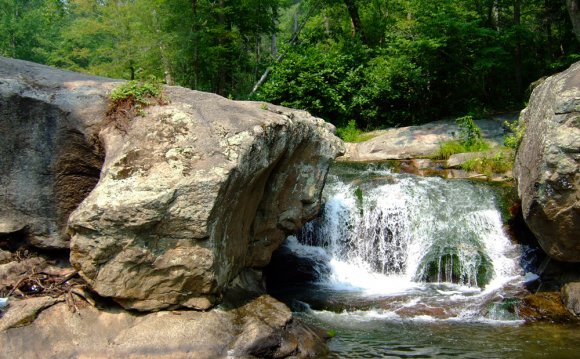 “My hips are killing me — they’re so tight!”

I’ve heard students grumble about a lot of legitimate aches and pains during yoga. Then I showed up to Laura Kupperman’s Yoga for Survivors class. Here, the complaints were a bit weightier.

One woman was fatigued from her new chemo meds. Another was having bone-density issues. Another was sore from all her immunizations — her treatment had wiped out her immune system.

I kept my mouth shut about my sore shoulder.

I braved Laura’s class in Longmont, Colo., before sitting down to talk with her about how this story began — when Laura’s world was rocked by a breast cancer diagnosis just after she returned from her honeymoon.

Laura doesn’t remember being angry when she was diagnosed. She was 37 and just beginning a new life. “I have to admit I handled it really well, ” she says. “Sure, I had those ‘why me?’ moments, but I couldn’t dwell on the scary possibilities. I really tried to devote my energy to moving on and getting better.”

Yoga helped her do that. A certified yoga therapist, Laura had been practicing yoga since 1995 and teaching since 2002, and she continued to do both during her chemotherapy and recovery from a double mastectomy in 2003. “I was less tired and had fewer side effects than I’d expected, ” she says. “And teaching yoga during that time was just amazing; I got to focus on other people’s bodies instead of obsessing about all the things that were wrong with my own. Yoga gave me a break mentally.”

More importantly, it gave her a profound acceptance that helped her to devote more energy to getting better, and less to anger and self-pity.

“I see an analogy between yoga and cancer: Each of them is what it is, ” she says. “All I can do is evaluate how I am right now and then figure out what I can do to make it better.”

A year after her mastectomy, Laura launched Yoga for Survivors to help other cancer patients and survivors make that connection.

Not your average yoga class

A petite woman with the sleek build of a dancer and a wide, warm smile, Laura welcomes all her students by name at the beginning of class, often with a hug. “How are you doing today?” she asks each one, attentively gauging how strong each student feels today. She emphasizes “today” — not yesterday, not last week.

Hearing their very real complaints, Laura responds with the empathy of a fellow survivor — and shapes the class around whatever the students who are there that day are feeling.

“We do a lot of chest and shoulder opening, and we do relaxation poses that help with nausea, ” Laura says. There are energizing poses to fight fatigue, strengthening poses to combat atrophy, and others to help with the common side effects of chemotherapy. Some poses help students focus on stretching certain muscles after surgery. Breathing techniques help with balancing the nervous system.

Mother of three Virginia Dutkin had never done yoga before she was diagnosed with non-Hodgkins lymphoma in 2005 at age 39. It was after she’d gone through a year of intensive treatment that she came across Laura’s brochure and decided to try Yoga for Survivors.

“I was a little intimidated at first, ” Virginia says, “but now I love it. I think it’s helped me to be more aware of what my body is doing.” She’s still anemic and, in her words, “not back to normal” since completing her treatment. “But on the days I go to yoga, I feel great and much less tired.”

The emotional benefits also keep Virginia coming back to Laura’s class. She found most cancer support groups depressing, but Yoga for Survivors proved a better alternative. “Laura’s group can relate to what I’ve gone through, ” Virginia says. “They are working through it and moving forward. It provides a good sense of community. It’s like a support group, but we don’t just sit around talking about our problems.”

Virginia’s only regret is that she didn’t start her yoga practice sooner. “I really wish I had gone to yoga when I was in treatment, ” she says. “That would be my advice to someone going through cancer or chemo.”

Fellow Yoga for Survivors student Kim Decker agrees. Already an experienced yogi when she was diagnosed with breast cancer in 2004 at age 31, Kim found Yoga for Survivors through a physical therapist who was treating the lymphedema she developed in her arm after chemotherapy. She did yoga during a later radiation regimen, “but I wish I had done it through chemo, ” she says.

“At first, I was so weak I couldn’t even do Mountain Pose, ” Kim recalls. “But Laura knows all the adjustments to help you, depending on what’s going on with you. With yoga, I’ve seen my strength return bit by bit.”

“Yoga is about being where you are at the moment, ” she points out, “but it’s also inspiring to see other people’s progress. Recovering isn’t just about regrowing hair. It might be that someone can stand on one leg now.”

Laura says that is the greatest reward — seeing her students move from sick and scared to strong and vibrant. “I don’t think of myself as a role model, ” she says. “If I can show these inspiring women that they can go on and have a great life, I feel so blessed.”